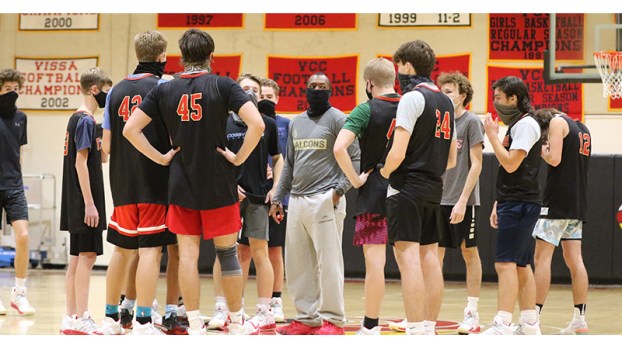 Fuqua School Varsity Boys Basketball Head Coach Mike Edwards gives instructions to his players during a preseason practice as they all wear masks while not involved in physical activity. They entered this week facing the prospect of having to wear their masks during physical activity until the VHSL reversed its decision. 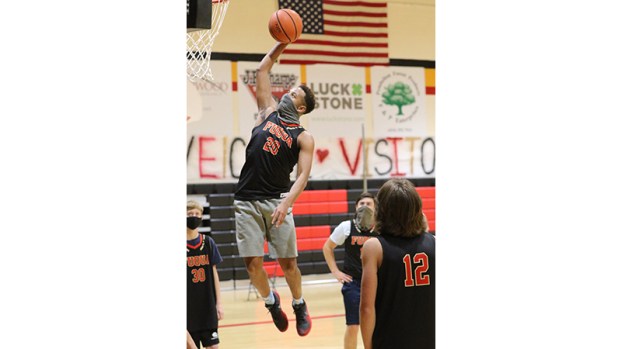 Fuqua School senior Maureon Tisdale-Couch wears a mask while going for a dunk following a practice session in November. Entering this week, Fuqua basketball players were facing the prospect of having to wear masks during games before the VHSL reversed its decision.

The Virginia High School League (VHSL) announcing Thursday, Dec. 10, it would require student-athletes to wear masks during competition due to COVID-19 before reversing its decision Monday, Dec. 14, took schools participating in winter sports on a roller coaster, including private institutions, like Fuqua School.

Fuqua technically is under the umbrella of a different governing body, in the form of the Virginia Independent Schools Athletic Association (VISAA), but in this case, Fuqua Athletics Director and Varsity Boys Basketball Head Coach Mike Edwards noted the distinction was not of great importance.

“I know VISAA normally goes off of what VHSL states, so when we got the email saying that we were going to have to wear masks, we were like, ‘How is this going to work?’” he said.

Originally done playing for 2020 after Dec. 11, the Falcons and Lady Falcons had a game added to their schedules. They are now set to play in Richmond on Friday, Dec. 18, at Banner Christian School. Edwards said early Tuesday afternoon, Dec. 15, that his team was set to practice Tuesday and Thursday, Dec. 17.

“We were like, ‘Alright, well, we’re going to have to ease our way into this,’” Edwards said. “I know I told my assistant coaches I was thoroughly thankful that we actually have bench depth, so we’ll be able to rotate a lot of kids in if they had to wear a mask. But I know a lot of schools that we play against, they’re not afforded that luxury.”

On their roster listed on MaxPreps.com, the Falcons have 12 players who can share the workload during a game, but even with that strength in numbers, Edwards indicated there was a great deal of happiness at Fuqua on Monday.

“Just believe, we were thrilled and excited to hear that (the VHSL) reversed action and said that masks were not needed (during competition),” he said.

Fuqua has already been requiring significant mask wearing in practices and games for student-athletes when they are not actively playing.

Edwards said that in practice, student-athletes are to have their masks on whenever they are stationary and talking, whenever they are to the side and not engaging in physical activity. They are also required to wear masks when on the newly spaced out bench during games as well.

He then explained Fuqua’s mask policy for its coaches.