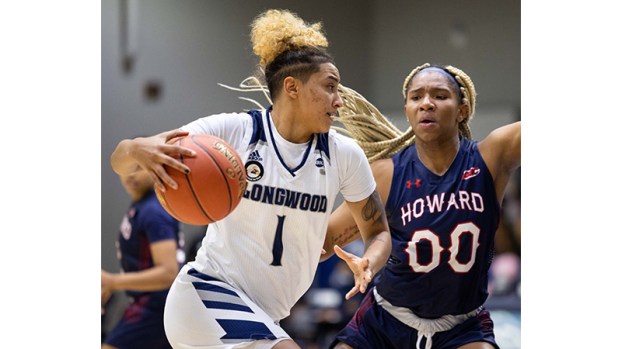 With the victory, Longwood (3-4, 2-0 Big South) has now bounced back from an 0-4 start playing out-of-conference opponents to win by double digits in their last three games against quality opponents — the Bison entered Saturday’s game 3-0, while Radford University was picked to finish second in the Big South Conference preseason poll.

On Saturday against Howard, Smith had a career day, scoring a career-high 20 points, while matching her career-highs in rebounds, 16, and blocks, eight. The Orlando, Florida, native, who set Longwood’s single-season block record and led the Big South with 74 rejections last season, has swatted 25 shots in her last five games, upping the ante each outing.

Saturday’s contest also marked the third career 30-point showing for McMakin and is the second straight game in which two Lancers had at least 20 points.

Sophomore guard Anne-Hamilton LeRoy nearly gave Longwood three players with at least 20 points Saturday, scoring 19 points with a pair of assists. She poured in 13 of those points in the opening quarter, the third time the All-Big South freshman team member has scored at least 10 points in a quarter this season.

The Lancers held a 49-to-39 advantage on the glass.

“I am really, really excited for our women,” Longwood Head Coach Rebecca Tillett said. “To come off of a really good performance in conference and then have to turn around and play a non-conference game is not typical, like most things have been in 2020. It was a big effort by us to continue to improve our defense. We saw that a little bit in the field goal percentage number, not quite as much in the actual number of points scored on the board, but the areas that we are looking for it to come in, it’s coming. And then again, our offense was powerful, unselfish, and a lot of people found ways to be effective.”

The Lancers got out to another red hot start, grabbing a 34-23 advantage in the first quarter while shooting a blistering 12-of-21 from the field with eight assists.

Longwood continues to storm out of the gates, averaging 28.3 points over their last four opening quarters. LeRoy’s 13 points in the first 10 minutes included a 5-of-6 showing from the free throw line, continuing her dominance from the charity stripe. The Seneca, South Carolina, native entered Saturday’s game leading the Big South with a 92% free throw percentage.

Smith’s huge first-half performance was accompanied by two other Lancers who notched double digits in the time-frame. McMakin added 14 points, six rebounds and three assists, and fellow sophomore LeRoy added 15 on an efficient 4-of-5 shooting with two assists of her own, powering the Lancers to a 51-48 advantage at the break.

“I think (Kyla) was doing some things that we’ve been talking about in terms of finding other ways to score,” Tillett said of the reigning Big South Freshman of the Year. “You could see her really attacking the rim a little bit and bracing for contact. I think she was patient, and I thought she played really, really well tonight.”

Redshirt freshman Adriana Shipp scored the first bucket of the third quarter, extending the Lancer lead to a game-high 15 points with 18 minutes, 31 seconds remaining. Howard rallied to pull within six points in the fourth, 78-72, but Longwood stayed cool and iced the game from the free throw line, draining 11-of-12 free throws down the stretch. The Lancers, who entered the game shooting a Big South best 80% from the charity stripe, topped that mark Saturday, knocking down 25-of-30 attempts.

“It feels great,” McMakin said, referencing the team’s hot offense. “It’s a lot of fun and joy to be out there when everything is working for you and your teammates are hitting shots and making good plays. It’s such fun basketball, and I think we really thrive when it’s fun basketball and we’re going out there and playing for each other and feeling that love. It’s a great atmosphere.”

Longwood has 11 days off before continuing its Big South slate. The Lancers travel to University of UNC-Asheville for back-to-back games Wednesday, Dec. 30, and Thursday, Dec. 31. Play will begin at 2 p.m. and will be streamed live on ESPN+.

After a last-minute, two-point home loss to The Citadel on Saturday, Dec. 19, Longwood University’s men’s basketball team had to... read more