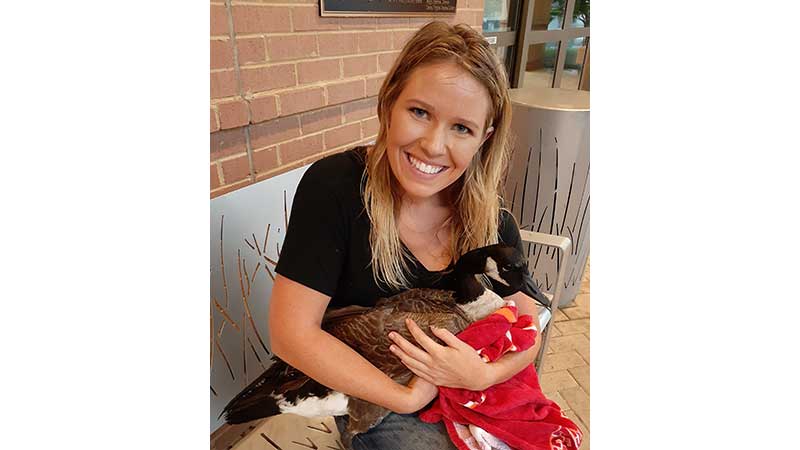 Farmville residents Sarah Allman and Clint Thackston recently worked together to help free a goose at Wilck’s Lake that had become tangled in some thick string. Pictured, Allman poses for a brief photo with the goose after it was cut free before letting the animal go.

A local couple was led on a literal wild goose chase in an effort to help out a distressed bird at Wilck’s Lake in Farmville.

Town residents Clint Thackston and Sarah Allman enjoy taking regular trips to Wilck’s Lake Park in order to spend time together and feed the ducks and geese that can usually be found around the lake and by the library.

According to Thackston, the couple was spending an afternoon feeding the birds when they noticed a goose that was unable to lift up its wing or fly around like the others.

A closer look revealed the animal had a thick section of string tangled around its wing, digging into the skin.

Although Thackston and Allman were unable to get close enough to help the creature, they returned the next day. As they searched around in the pouring rain, they discovered the same injured goose.

The couple threw a beach towel over the bird in order to catch it. Allman held the goose as Thackston used his pocket knife to cut the string, which was wrapped several times around the wing and body of the goose.

“The goose didn’t fight us while we were holding him,” Thackston recalled. “I guess because he could tell we were trying to help him.”

After stopping to take a few photos and ensure the bird was alright, the couple released the animal.

After a few precautionary flaps of the wings, the goose was freed and ran off.

Thanks to a bit of compassion and ingenuity, the couple turned a goose’s rainy day gone south into a happy one.