Gillen to play soccer for Ferrum 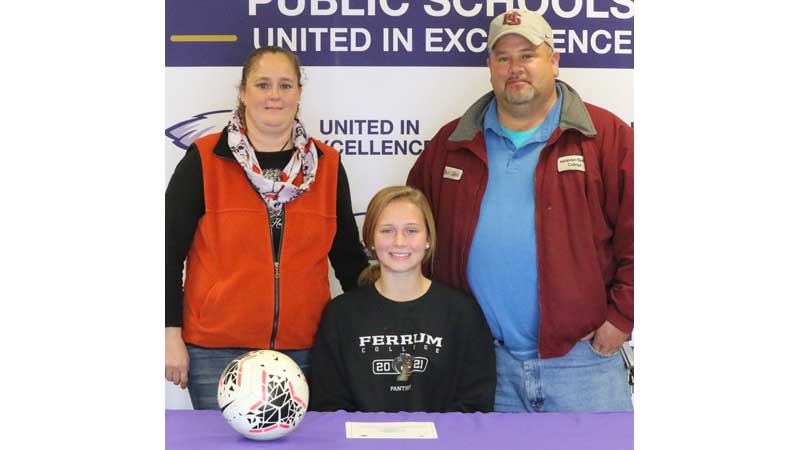 Prince Edward County High School senior Amber Gillen smiles for a picture with her parents shortly after her signing ceremony Friday, Dec. 18, during which she formally committed to play soccer for Ferrum College. On the left is Kathryn Gillen, and on the right is Bill Gillen. (Photo by Titus Mohler)

Amber Gillen was described by a 2019 Prince Edward County High School (PECHS) soccer coach as the glue that held the Lady Eagles together, and Gillen will be taking all the abilities encompassed by that description to the college level next fall.

In front of her family, PECHS coaches, administrators and an online viewing audience Friday afternoon, Dec. 18, Gillen formalized a verbal commitment she had made in August by signing to play soccer for Ferrum College.

“It was a great feeling,” she said. “Signing just makes it all feel so real, and I’m just so excited.”

And she said she is happy to bring more awareness to soccer at PECHS, where she is set to play her senior season this coming spring after the COVID-19 pandemic led to the cancellation of her junior campaign in 2020.

Gillen, 17, has been playing soccer since she was 5 years old, and it became a dream of hers to play collegiate soccer around the age of 10, when she was playing Prince Edward-Farmville Youth Association recreational soccer.

She graduated to a new level of play when she began competing for travel soccer teams, and after this spring, she will also have been a four-year letterman on Prince Edward’s varsity girls soccer squad.

She said she had a list of colleges she was interested in playing for, and the list eventually became narrowed down to a top three — Ferrum, Shenandoah University and Longwood University.

Her parents, Bill and Kathryn Gillen, knew she was going to play collegiate soccer.

“It was just a matter of where — where she fit in,” Bill Gillen said. “The day we went up to Ferrum, I told my wife when we left, I said, ‘She’s playing here, I can tell you that.’”

Amber said she joined the Richmond Strikers travel team back when she was a freshman in high school, and it is primarily with that squad that Ferrum recruiters have seen her play and have followed her during her high school years.

She affirmed it was her visits to Ferrum that gave the college the edge over the other schools she was considering.

“I love the area where it’s located,” she said. “It reminds me a lot of Farmville. I’m definitely not a city girl, so when I saw how rural it was, it was really, really nice, and I love the campus. And then I loved meeting the team and the coach, and that really sold me on everything.”

Her father praised her for her excellent academic standing and for her initiative in the collegiate soccer program preparation and selection processes.

“She was in charge of it all,” he said, referring to those processes. “We gave her a little bit of guidance. Of course, we helped her with the travel back and forth with all the soccer clubs that she played with, but she did 99.9% of it all on her own.”

As for the specific soccer training, she benefited from a variety of coaches, including her father and a former Longwood men’s soccer assistant coach, Sam Avery.

“He spent a lot of time with Amber, training her throughout the years and actually coaching her,” Bill said of Avery. “To this day, he’s still training her.”

Amber has gained significant experience at the center back position, but she noted she could end up changing positions for the Ferrum Panthers.

“And I’m all for that, as long as I can play,” she said. “But they recruited me as a center back, and from what I’m understanding, that’s probably where I’m going to be playing there.”

She said the Ferrum coach told her that after seeing her play and seeing her work ethic, it is definitely possible for her to see playing time in her freshman year.

“That really was another reason that sold me (on Ferrum), because I know I can compete on the field, especially when I go there and I see my competition,” Amber said. “I’m pretty confident with training and just plain hard work that I’ll be able to get on the field.”

She said she plans to major in either biology or animal science with minors in teacher education and coaching.