Fruitcake: The treat that everyone loves to hate 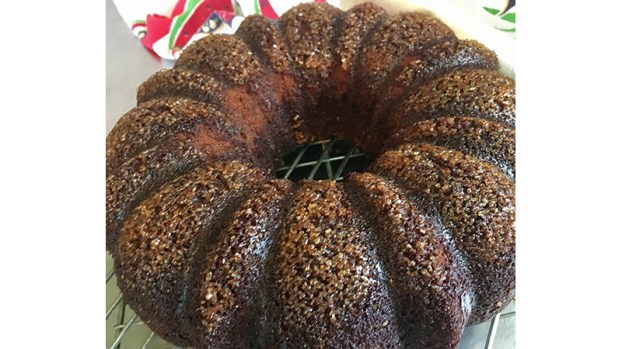 This fruitcake has less fruit in it so that it can be made in a decorative pan. 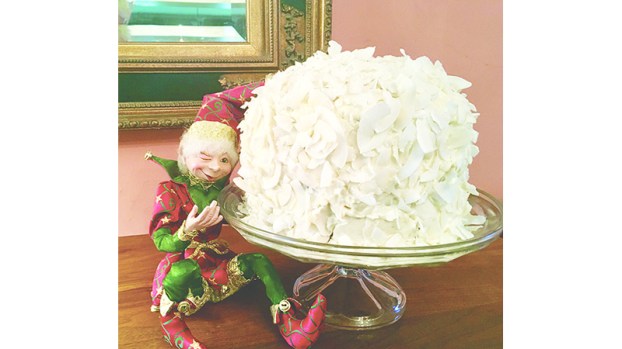 There will be a traditional fresh coconut cake for Christmas Eve, even if there are just two of us this year.

In my family, celebrations always involve baking, and Christmas is no different.

My grandma made fresh coconut cake and served it with a red colored, lemon flavored gelatin concoction. She also made a “white” fruitcake that had coconut in it. There was a theme in her holiday cooking.

My mom continued the tradition of gelatin delicacies made with Chalmers gelatin – a box of unflavored gelatin shreds and a coloring tablet, but veered away from family tradition with a different fruitcake. She preferred very dark, dense ones, full of raisins and dates and citron. She baked them before Thanksgiving, doused them liberally with orange juice and hid them from hungry, marauding kids and her husband.

We weren’t allowed to eat these things until Christmas when they were supposed to be mellow. Somewhere along the way, we kids spoiled that culinary myth by demonstrating that fruitcake was just fine while still warm from the oven and that it made a far better breakfast than what we usually had.

And so it goes. Traditions continue, but with new twists. In my family, cookies are the centerpiece of holiday feasts. Friends and I bake for several days and generally produce 12 different types of cookies, one for each of the 12 days of Christmas. We make gingerbread men and decorate them to look like people we know. Spritz, shortbread, meringues, biscotti, and whoopy pies are usually on our baking list as well.

Even with all those cookies, I still make fruitcakes. Every year on “Stir It Up Sunday” (the last Sunday before Advent), I make my first batch of six to eight loaves. They’re not exactly my mom’s fruitcake. Yes, they’re dark, but they’re filled with dried apricots, toasted pecans, sultanas, dates, candied ginger, fresh orange zest, dried pineapple, candied cherries and vast quantities of bourbon. No ghastly, sticky fruitcake mix of citron, lemon peel and who knows what else. The cherries are my only concession, and, thanks to a friend in England, I’ve learned to wash off all the gummy syrup before using them. The fruit macerates for a day or two in bourbon and then the finished cakes are doused with lots more.

My fruitcakes are ready to eat immediately. The first batch goes to my gardening assistant, who claims that he can get drunk eating a slice or two; to my neighbor down the street, who refuses to share it with her daughters; and to friends in Farmville. One year, a stranger asked if I would make one for her. Within two weeks, several people are asking if there are any more fruitcakes to be had. They’ve eaten all of theirs – for breakfast, in many cases. I just smile because I know how much bourbon is in those cakes.

So, about two weeks after making the first batch, I do a second one and then a third one the week before Christmas. By Christmas Day, the fruitcakes are all gone, and if I’m lucky, there may be a small one left for Christmas dinner.

Everyone knows no one eats fruitcake anymore. It’s just a joke on late night television, a gift that keeps getting passed around and never eaten. I don’t know what happens to my fruitcakes, but they vanish. I haven’t made any this year and there are rumblings of discontent. I suspect I’d better head to the kitchen.