Artist in Residence — Comfort through art and fabric 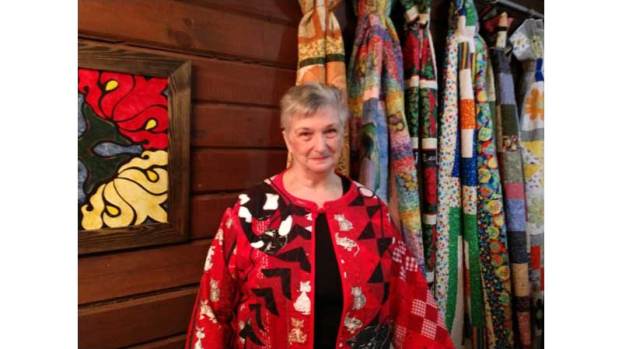 Pattie Brunette is a textile artist who particularly loves to use her experience and abilities to create artwork with fabric while also teaching quilting at Lib’s Place in Rice. 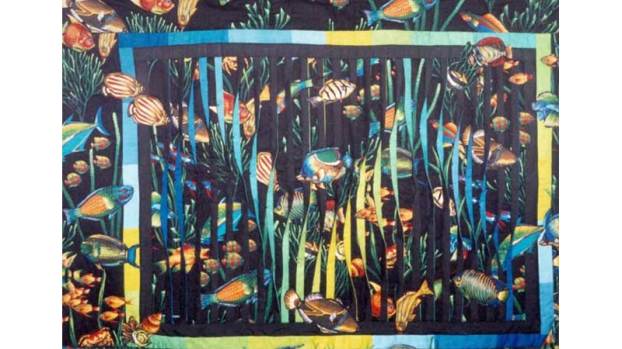 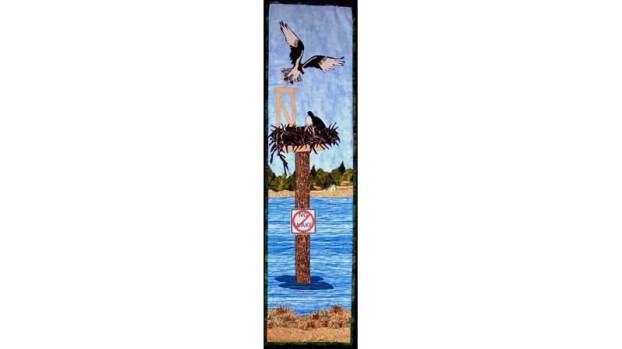 This wall quilt, named “Honey I'm Home,” was designed by Pattie Brunette from a photo taken in Deltaville, Virginia, from Frank Lackey's front yard. It was made for Lib's Place. 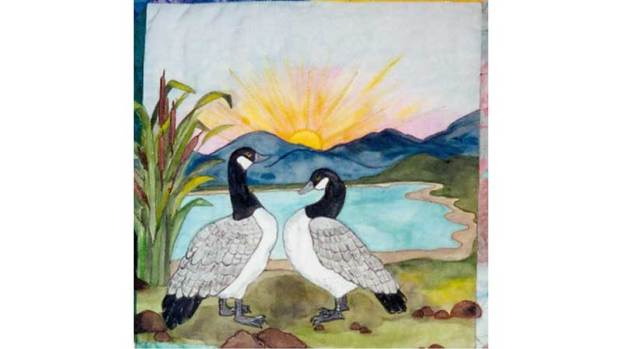 The sun shines on the horizon as wildlife looks on in this close-up of one of the hand-painted “windows” included in the “Windows of the Northwest” kingsized quilt that Pattie Brunette helped create.

Pattie Brunette has become an impactful part of the artistic community in Farmville and Southside Virginia in the medium of quilting.

She could be described as a textile artist or a quilter.

Since moving across the country to Virginia in 2013, she has lent her significant talents to helping teach and facilitate quilting at Lib’s Place, a business in Rice that sells arts and crafts materials, including sewing machines, and offers classes in quilting, sewing, needlework, drawing/painting, jewelry making, cake decorating and card making.

Brunette noted that she moved out to Virginia after her husband and her mom passed away. She had been their caretaker.

Her brother lives in northern Virginia, and her best friend of 52 years lives in Farmville.

“So I moved here, and I knew Lib’s was here, and so I came out and volunteered at Lib’s, and it gave me a great opportunity to make a lot of new friends,” Brunette said. “Lib’s is kind of like a home away from home for a lot of people and a lot of the women in the surrounding area.

“I volunteer teaching and creating patterns, making store samples,” she continued. “And sometimes I do my own quilts at home, doing some art quilts and stuff.”

For this role she finds herself in now, Brunette was well-prepared by her childhood and her life on the west coast.

She grew up in a family that loved to do all kinds of crafts and artistic projects.

“So I have a vast knowledge — a little bit of everything,” she said. “Mom and Dad did candle making, woodcraft, carving, Italian tile, painting and jewelry. I know a little bit of each thing, how to do it, but I really concentrate mostly on fabric and art quilts and designing patterns, as well as I love to do silk ribbon embroidery and beading, but I don’t have too much time to do that.”

Brunette’s family was a military family that moved around a great deal.

“I lived in eight states, and a couple of the schools my brother and I went to, we were fortunate, they were experimental schools, and they had some really good, innovative art classes, so that also added to that,” she said. “And so when I graduated high school, my mom wanted to encourage that, so she sent me to commercial art (school).”

She noted there was an overabundance of commercial art students in the late ’60s and ’70s, making that a highly competitive field.

“I ended up working at various jobs such as drafting, home interior decorating, as well as other jobs that all used some form of art knowledge,” she said.

The year 1997 ended up being a critical year in the history of Brunette’s artistic pursuits.

She found that creating with fabric was a great way to use her art knowledge and use her “creative juices.”

While living in the Puget Sound area of Washington state, she joined a quilt guild.

“We had over 350 members, and many of those were international quilt teachers,” she said.

She noted that being part of the guild was a great experience in which she learned all forms of quilting, from traditional to Victorian to contemporary, and she learned various methods of creating art quilts.

“I was fortunate enough to learn all kinds of methods of using fabric by using it as sculpture or thread sketching, painting with dye, all kinds of things,” she said.

“Basically I love all forms of quilting, especially the art and landscape quilts, as well as the Victorian Crazy Quilts,” she stated.

Brunette said the thing she loves about fabric is that it has practicality and versatility.

“It’s something that can be used to comfort somebody,” she said. “(It has) usability as opposed to creating an oil painting that just sits on a wall and gathers dust.”

The comfort an art quilt can provide someone can come not only through the warmth of being wrapped up in the fabric but also in the meaning of the art.

“I now make memory quilts, which are real popular right now — making quilts out of people’s clothes, like T-shirts or children’s clothes or men’s cotton shirts after they’ve passed away and the family wants something to pass on,” Brunette said.

In terms of what inspires the content of a significant amount of her artwork, Brunette pointed to nature.

“I love nature,” she said. “We lived on wetlands in Washington out on the peninsula where there was lots of wildlife, and herons were daily visitors, ducks, mallards and things like that.”

She said she is not really into high contemporary art, which can focus on concepts, featuring a lot of shapes, such as squares and diamonds.

“I like the realistic part of art, which is more nature-themed and flowers,” she said.

As for creating art in her free time, the possibilities are there, but the time is short these days.

“I have several patterns and designs I’ve done, but I’m usually busy making samples for the shop, or I also take in quilts on consignment, so sometimes that keeps me really busy,” she said. “So I don’t get to do my hand painting and stuff as much as I really like, but I do have several set up for me to do.”

She said that down the road, she would like to teach painting on fabric, or dying of fabric, at Lib’s Place.