A life filled with learning and passing it on 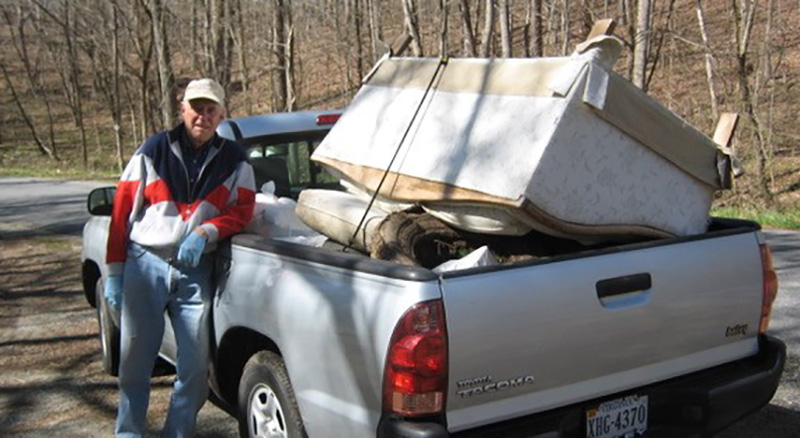 Dr. Ronald Heinemann helps with the cleanup of the Appomattox River, one of the ways in which he helped enrich the Farmville community.

Dr. Ronald Heinemann is remembered as a man of honor, commitment and strong beliefs whose passion was teaching in the classroom and mentoring students, which he did for decades at Hampden-Sydney College (H-SC).

Heinemann passed away unexpectedly Nov. 18 at the age of 81.

“We were married for 58 years, and we spent 52 years here at Hampden-Sydney, and for both of us, it was a wonderful life,” his wife Sandra Wood Heinemann said. “Something he said many, many times — ‘I’ve had a wonderful life.’”

“We were high school sweethearts in Arlington,” she said. “I did not go to the same high school he did, but we met there. And then we dated as well as we could when we were in college, because he was in New England at Dartmouth, and I was in Pennsylvania at Bucknell.”

She recalled an example of his dedication to her one winter when he undertook a 350-plus-mile trip in his 1952 Ford car that he used while at college in New Hampshire.

“He really wanted to see me, and I wanted to see him, of course, and so he got in that car in the middle of the night, with no heater, and drove all the way down to Lewisburg, Pennsylvania, where I was and arrived the next day to see me,” she said.

In 1968, Heinemann began his teaching career at Hampden-Sydney, where he was a professor of American history. He also returned to Dartmouth in the 1980s and taught there. He officially entered retirement in 2004 but continued to contribute to H-SC in different ways, including teaching, through 2020. He received numerous awards and recognition for excellence in teaching and research, and he was also a leader in faculty governance at H-SC.

She noted he participated in helping develop the Moton Museum, which he was very much committed to.

“And of course, he kind of fell into the Friends of the Appomattox (River),” she said. “I had a friend from one of my garden clubs, and she invited me to a social gathering that the Friends were having, and so Ron and I attended, and he got really excited about the group, and they helped him learn to paddle, and he participated in all of the cleanups, of course. So I felt that was one of his outlets.

“He did Meals on Wheels, he did a variety of things in the community,” she added.

She said that in terms of Hampden-Sydney, she and him were fully integrated into the school’s community, which she thinks, in many ways, was unique.

“We lived here, built two houses on campus, we raised our children here,” she said. “They graduated from Prince Edward (County) High School.”

He liked many aspects of H-SC student life and applied himself fully to his role of helping and mentoring his students.

“Everything he did, he approached with enthusiasm, thoughtfulness,” Sandra said.

Ryan Pemberton knew Heinemann as both a teacher and co-worker. Pemberton, who graduated from Hampden-Sydney in 2000, is now director of the college’s Wilson Center for Leadership in the Public Interest.

“Heinemann was a giant here on campus, and I was lucky enough to have him as a professor when I was a student,” Pemberton said. “And then when I came back here three years ago, I certainly worked with him, I’d never say as a peer, certainly more as a colleague.”

Highlighting some of the values treasured at H-SC, Pemberton noted one of them is the notion of objectivity in the classroom that, he said, is so critical in 2020.

“Heinemann was just a master at that,” Pemberton said. “He was one of the best listeners, one of the best conversationalists you’ll ever come to know, because he had, as you can see in his obituary, these very deeply held opinions, and he knew exactly what he was coming from.

Pemberton explained what life was like as a student in Heinemann’s classroom.

“What would happen is, if you came in with one of these sort of, ‘Look at me, I’m on the opposite side of the political spectrum from you’-kind of opinions, one of two things would happen,” Pemberton said. “Either you would sort of get skewered because your facts weren’t right, the logic argument wasn’t strong, or he would say, ‘You actually made a very good point there.’

“But what would happen is, you would always be invited to come back and have another conversation.”

What Heinemann cared about as much as anything was this notion of student growth, Pemberton said.

“He had this innate ability to push and prod and make you think about these beliefs you might have come in with as an 18- or 19-year-old and examine them,” Pemberton said. “He would not just simply say, ‘Well, you need to think the exact same way that I do or else.’

He described Heinemann as charismatic in the classroom.

“He would lecture for 50 minutes, and he would stop on the dot, and you would be spellbound for 50 minutes — he was that good in the classroom,” Pemberton said.

“He believed in that classical, liberal education, of freedom, of open inquiry, of debate, of dialogue, of objectivity, of wanting to grow on his own,” he said.

The culture of open inquiry and dialogue was present in the Heinemann home as well, as Sandra recalled she and her husband talking about politics and history.

“I am not a historian, of course, but there were a lot of things I didn’t know, and it was wonderful for me to be able to say, ‘You know, Ron, I didn’t know about that,’” she said. “And then he would turn around and say, ‘Well, this is what happened in such-and-such a time in history, and so-and-so was president,’ and this sort of thing, so I learned from him all the time about historical things, but in particular, American history.

“So my life was very enriched by being married to Ron, in so many ways,” she continued. “We’re of like mind about how to raise our family, and he just knew so much, and he shared that with me.”

Heinemann placed a priority on family, with plans in place every year to see his children and grandchildren more than once.

“He very much wanted to be a part of their lives, and I think he was as successful as we could be given the distances,” Sandra said. “He adored them, and they loved him too. He was so interested in their educations and what their interests and activities were, and he always encouraged them to do their best, and I think they’ve done that.”

As she reflected back on her husband’s life, Sandra reaffirmed that he loved it.

“He loved life, and it was long, but it would have been lovely to have had him around a few more years,” she said.

H-SC Trinkle Professor of Biology Dr. Alex Werth, who was a colleague and neighbor to the Heinemanns, summed up why Ron was so impactful at the college, in the community and in life.