Project to extend the gardening season was a success 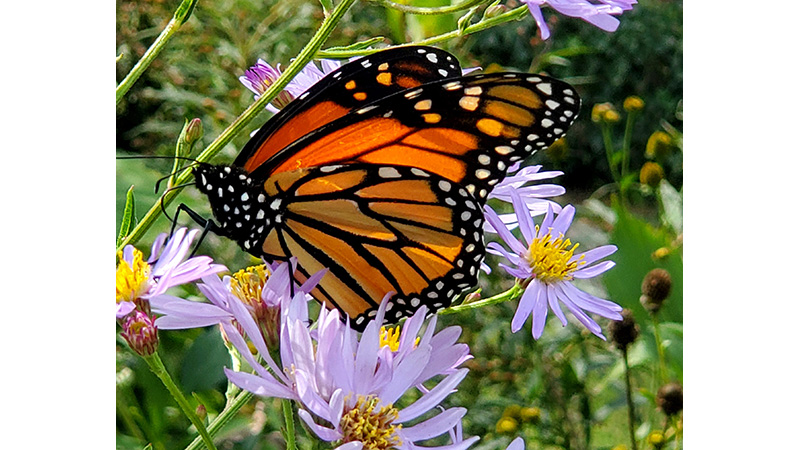 The late fall garden should include a variety of textures, faded colors and drooping plants, all accented by vibrant bursts of colors and monarchs.

Late last winter, I accepted a challenge to infuse more native plants into my existing garden while also extending the growing season. All through February and early March, I researched plants and growing conditions and eventually compiled a list of plants that I thought would accomplish both goals.

As some of you know, this project has been an adventure. In early April, huge shipments of plants began to arrive. I ultimately planted more than 50 new native species, including common sneezeweed, four species of late-blooming goldenrods, some asters, rattlesnake master, St. Johnswort, monarda, native sun flowers, partridgeberry, salvia, black-eyed Susans, little bluestem grass and wild quinine, plus the usual mix of ironweed, Joe Pye weed and native mints. With the exception of the partridgeberry, the natives settled in without too much difficulty. Like any other new plants, they required regular watering throughout the hottest, driest part of the summer. It’s a myth that native plants will do just fine without supplementary watering. By late June, my mixed perennial beds were a glorious mix of yellows, reds, and oranges, all highlighted with patches of silver and cream.

In late June, on the advice of a friend who suggested that I needed to hedge my bets with a non-native or two, I bought more than three dozen lantana plants, both sprawling and upright varieties in every color available, including a solid cream, which was new to me. They proceeded to sulk all through July and early August. They didn’t die or refuse to bloom, but they didn’t exactly thrive either. I wasn’t happy with them and threatened removal to the compost pile. After the rains arrived in August, however, they perked up and began to put on a fabulous show.

The glorious display of colors and textures continued through July and on into late August. By September, many of the native blooms were replaced by seed pods; pinks and purples were transformed into grays and browns. So, again, I added some more tough, late blooming non-natives. Chrysanthemums. Five dozen of the latest blooming varieties that I could find. Now, I have to admit that I’m not a fan of these plants. They just seem so, well, common and trite. Nevertheless, I planted huge waves of cheery, yellow ones in the darkest corners of the garden and smaller patches of vibrant red ones everywhere else. The result was magical. There’s nothing like the texture and color of fading lotus leaves contrasted with dense plantings of deep red chrysanthemums. I’m a convert.

It’s now late October and there is still much to see, including water lilies and camellias. What did I learn from this project? First, plant species that are rich producers of nectar and pollen, and the butterflies and bees will feast. In mid-October, the garden was filled with more monarchs than I’ve ever seen. Native plants behave quite differently in the home garden than in the wild. Many natives tend to be leggy and sprawl, so they need to be planted very close together and underplanted with shorter bushier plants. Dense plantings also require less mulch and less weeding. Spend lots of time over the winter planning what you want to do and making lists of plants that you might like. Don’t be afraid to include some well-chosen nonnatives that are pollinator friendly and can take tough conditions. I wish I had planted vibrant, wine-colored cox comb.

And, finally, take time to sit on the back porch and enjoy your little piece of Eden. I don’t know what gardening conditions will be like next year, but this year I was successful in extending the season in my garden by about a month. I’m happy.

DR. CYNTHIA WOOD is a master gardener. Her email address is cynthia. crewe23930@gmail.com.