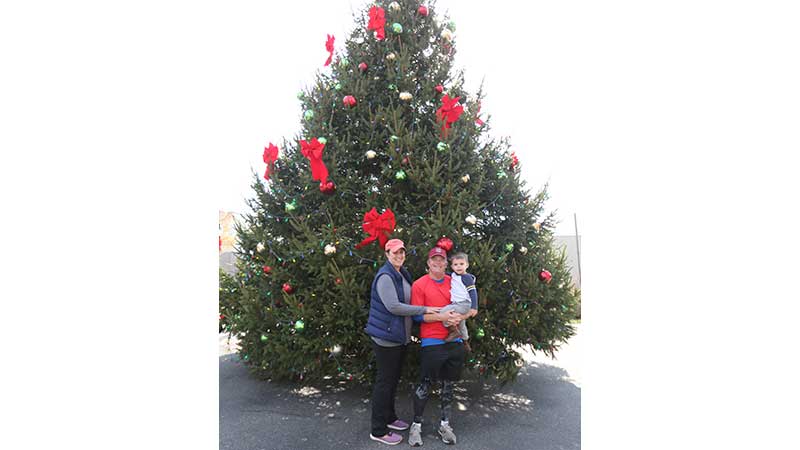 This year’s tree, standing 26 feet tall and weighing in at approximately 1,500 pounds, is the first live tree the town has ever had. The sprawling Norway spruce comes with some impressive stats.

According to Farmville Town Manager Scott Davis, the tradition-in-the-making of the Farmville Christmas tree extends back to December 2015. Each year, the town holds a special tree lighting at the High Bridge Plaza, though the ongoing COVID-19 pandemic meant this year the celebration commenced virtually.

In years past, the town utilized a synthetic tree donated by Longwood University that previously was used in the Rotunda.

“Over the last few years, the synthetic tree began to deteriorate and was at the end of its useful life,” Davis said. “COVID caused us to re-evaluate the purchase of a new synthetic tree that can be tens of thousands of dollars brand new, so we looked into a real tree.”

The town’s 2020 tree, according to Davis, was cultivated from Merwine Farms and Nursery in Pennsylvania.

Delivered from Pennsylvania on a tractor trailer, it took assistance and equipment from Dominion Energy and two of the town’s bucket trucks in order to set the tree in its foundation which was welded by town crews. The tree also has guide wires to help it stay secure as it stands proudly in the plaza.

Davis said it took six or seven town employees at various times to install and decorate the tree which features countless feet of lights and approximately 250 ornaments. The star was placed on top by an employee in a bucket truck.

Davis said the tree was purchased and donated to the town by The Farmville Downtown Partnership, noting the cost of the tree, plus delivery, was $3,550. He added the estimated cost of ornaments and lights were around $3,500.

Caring for such a large tree is a task undertaken by Jay Wilkerson, the town’s horticulturist. The tree drinks up two to three gallons of water each day. The tree is expected to last through Christmas before being taken down the week following New Years.

Davis also said the man delivering the tree stated he has delivered trees from the same tree farm to television personality Judge Judy.

Farmville Mayor David Whitus said he’d witnessed other communities celebrate tree lightings for years. When he became mayor in 2014, one of his goals was to implement such festivities in Farmville, a vision which was brought to life in 2015.

“I saw and I see, until this year’s virtual lighting, how it brings people from all across the community together,” Whitus reflected. “Many people have remarked that the tree lighting is like a scene out of a Hallmark movie. There are so many good tidings and the coming together of the community — unity.  Each year it has grown and various things have been added, like hot chocolate, selling of stuffed animals for Christmas Mother, community choir and school bands. It’s just a wonderful time of the year for our community.”

Whitus said although it was difficult to see the festivities limited during the pandemic, he sees a light at the end of the tunnel in the form of a 2021 tree lighting he hopes will be bigger and better than ever.

Christmas cheer amid a pandemic