The news came in the form of a Monday afternoon press release by the Office of the Governor. The release cites the Northam administration is preparing to release a report on the impact of legalizing adult-use marijuana compiled with input from government officials, policy experts, health care professionals and community leaders. 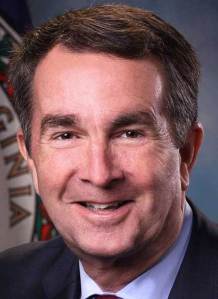 “It’s time to legalize marijuana in Virginia,” Northam said. “Our commonwealth has an opportunity to be the first state in the South to take this step, and we will lead with a focus on equity, public health and public safety. I look forward to working with the General Assembly to get this right.”

The release goes on to say the Northam administration is “working closely with lawmakers to finalize legislation in advance of the 2021 General Assembly session.”

In Farmville, residents had mixed feelings about the news.

“Why not?” asked resident Warren Reid. “It has proven to be a great asset for anxiety, cancer treatment and it is not as harmful as people make it out to be. It definitely needs to be decriminalized.”

Farmville Police Chief Andy Ellington said Wednesday, Nov. 18, that while Northam’s announcement did not come as a surprise, he did not support the decision.

“With recent bills and laws that he has signed off on, this was totally expected,” he said. “In no way do I or will I support this legislation. I have always been a firm believer that marijuana use leads to the use of Scheduled 1 and 2 drugs. Marijuana can also, unknowing to the user, be laced with other narcotics such as fentanyl or ketamine that can become addictive and in most cases be lethal.”

Ellington went on to say that research has shown long-term, heavy use of marijuana is linked to psychological and physical health concerns, lower educational attainment, a decline in social class, unemployment and motor vehicle crashes.

“In short, I feel legalization will lead to more use and addiction overall. That could cause real problems — for individuals and society at large — down the line,” he said.

Ellington said that roughly half of Farmville’s drug arrests for the past two years have involved marijuana.

“However, a substantial number of those offenders simultaneously possessed schedule 1 or 2 drugs, or were committing other crimes,” he highlighted.

Alex Barker, a Longwood graduate and member of the Democratic Socialists of America and the Farmville Peaceful Protest for Justice group, said Wednesday he felt there were many benefits to the legalization of marijuana.

“The state has already decriminalized the drug, but this is a larger step that will ultimately yield a fair amount of benefits,” Barker said. “The legalization of recreational cannabis will do wonders for the state, certainly in terms of tax revenue and job creation, as we have seen in states like Colorado and Washington. According to The Colorado Sun, Colorado’s marijuana industry is now worth $6.5 billion, with 3,000 licensed marijuana businesses and 40,000 people licensed to work for these businesses.”

Barker, who holds bachelor’s degrees in sociology and political science, said it is important to look at the tax revenue the state stands to collect from cannabis sales and where that money should go.

“The money the state could gain from the sale of marijuana should primarily be used to help the communities most affected by the rigid enforcement of anti-drug policies,” he continued. “Low income communities, and particularly minority communities, have been disproportionately affected by such policies for decades now. African American residents of the commonwealth have, historically, been three times more likely than caucasian residents to be arrested for marijuana charges. By using the tax dollars from the sale of cannabis to invest in disadvantaged communities, we may be able to rectify many of the problems caused by the state’s prior enforcement of anti-marijuana policies.”

“According to reports from state law enforcement officials, in 2019, there were 26,470 marijuana-related arrests. Of those arrests, approximately half of those arrested were under the age of 24. Waiving the sentences of these offenders would put a lot of young people back into the workforce in an economy that stands to gain hundreds of thousands of jobs if Colorado has shown us anything.

“Additionally, we would stand to save a lot of tax money, as less prisoners means less state funding that has to go to prisons. That funding could also be directed to other causes that will better the lives of Virginians.”