Flood veterans say this was no big deal 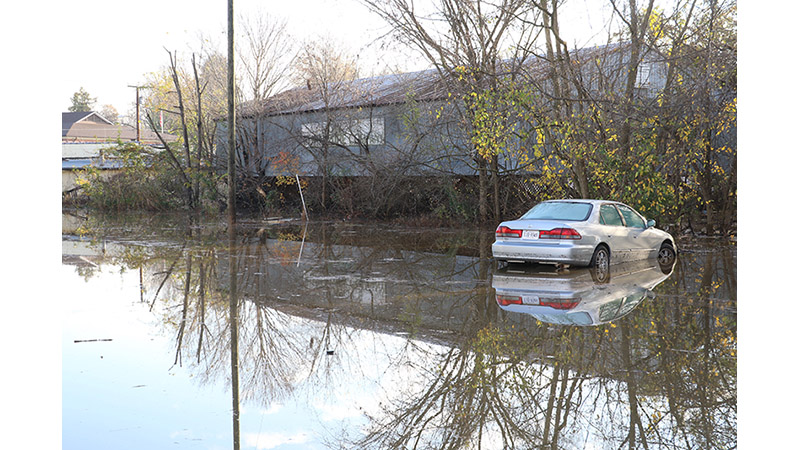 While a significant amount of water washed through Farmville Thursday, Nov. 12, and Friday, Nov. 13, it was not close to matching the greatest amount of flooding the town has seen previously.

“Compared to the floods we’ve had in Farmville, I would say this was more like a water event,” Farmville-Prince Edward Historical Society President Jimmy Hurt said Friday afternoon. “This happens all the time in Farmville. Every couple years, as long as I can remember, even as a child playing around on my bicycle, I can remember having events like we had yesterday.

“I was over at the post office last night, and I didn’t even bother going over there and looking at it, because you know, it’s the same ol’ thing to me.”

Years ago, the historical society asked him to put together a presentation on the flood that came to Farmville in 1972.

“When I did that, I went back through all the meteorological records and got every time it flooded in Farmville,” he said. “The flood level, I figured out each year how much it was and made charts and graphs, and as far as I know, 1940 was the second-worst flood since records have been kept, and ’72 was the worst.”

He noted that 1996 featured another deep flood in Farmville.

“Since then, there really hasn’t been anything other than water backing up on Second and Third and Fourth streets,” he said.

He is quite familiar with those areas, pointing out that in the past, he lived on Second Street and worked on Third Street.

“I can just about look at the aerial photos, which I did this morning on the internet, and tell you the flood level,” he said. “‘Ah, it came up to right here on the street.’

“Now in ’72, I went around and looked at all the photos, and I could tell you where it went on each street and so on,” he continued. “And I would say it was almost 29 feet above flood level, I believe, in ’72, and I don’t think this (time) would have probably been maybe 10 or 12 feet.”

He said that judging how the water got up in Third Street, like it did Thursday, it was probably five, six or even seven feet lower than the flood of ’40.

“So I hate to belittle yesterday, but just really, to me, it wasn’t (anything),” he said. “It happens all the time.”

Poulston TV & Appliance, located at 609 N. Main St. in Farmville, typically has a front row seat for the flooding or water events occurring in town.

He noted that as a result of that event, his store had six feet of water inside the building.

The last time he had flooding in his business was in 1996.

The event this week ended up being simply a close call.

“God was good to me, because it came right to my floor level without flooding anything,” he said.

He stayed at the store all night between Thursday and Friday.

“And of course, I had the doors sealed, and I had taken precautions for any water that would come in from the outdoors,” he said. “I also sealed up the storm drains, because your storm sewer stuff backs up into your building if you don’t seal them off.

“We had no damage from this other than extra work and just a small amount of puddles in the floor, seepage through the wall,” he said.

He drew another comparison between this week’s flooding and the flood of 1972.

“If I have measured correctly by statistics, because I have it written on one of the outside walls here, this flood we just had last night would have had to have six more feet of water to equal ’72,” he said Friday. “I’m just absolutely thankful this morning that things are in good shape for me.”

Hurt explained how water events and flooding happen in Farmville.

“What happens is, most of the water from Appomattox County and Buckingham, as it falls, it has to come into the Appomattox River,” he said. “Well the elevation up at Holliday Lake in Appomattox — that’s where the Appomattox (River) starts — as the water flows out of that lake, that lake is (at) an elevation of approximately 600 feet above sea level.

“When it gets over there to Poulston’s, the level going under that bridge is right at 300 to 305 feet on a normal day,” he continued. “So you’ve got all the water from Appomattox and Buckingham. Every time it has a hard rain, all that water runs into the Appomattox, and it has to come through Farmville.”

“So as the water comes on down from the Appomattox and Buckingham and it gets to Farmville and the river is already coming over its banks, it has nowhere to go, but it starts backing up,” he said.

“Each time it rains, it all depends a whole lot on how much they have upstream in Appomattox and Buckingham. If they have a lot, of course, and we do too, it backs up in Farmville.”

He said the Appomattox River simply cannot get the water through Farmville and out of town quickly enough.

“It’s been happening for hundreds of years,” he said.