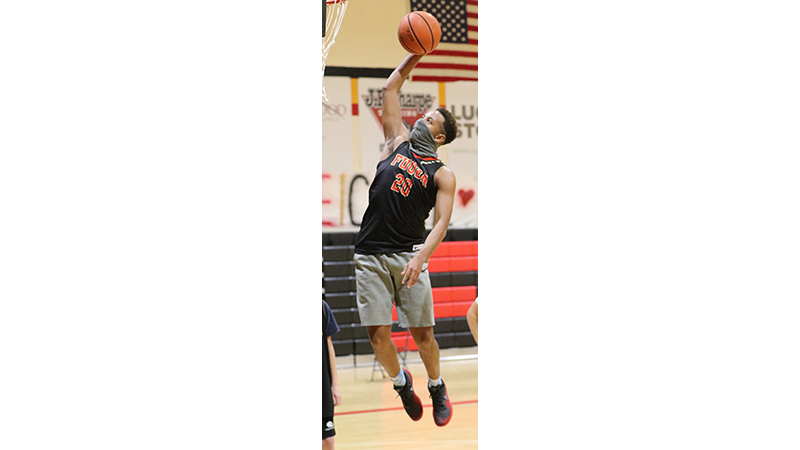 Fuqua School senior Maureon Tisdale-Couch is one of the Falcons’ varsity boys basketball team captains for the 2020-21 season. He will be playing at the point guard, shooting guard and forward positions during the course of the year. (Photo by Titus Mohler)

Fuqua School’s varsity boys basketball team enters the 2020-21 season with some returning leaders and some players new to the sport who are about to begin play in a new conference with new rules and regulations governing practice and play due to the COVID-19 pandemic.

“We are practicing with masks,” Falcons Head Coach Mike Edwards said. “When we’re doing live physical activity, we will not wear masks, but when we … (are) stationary or when we’re talking with our guys, we’ll wear masks the entire time.”

He noted the school has not required COVID-19 tests of his team’s players, but they are following all safety procedures and guidelines put in place by the school.

“We do temperature checks every morning,” he said. “If we have students who feel as if they’re ill, we ask them not to come to school. We ask them to then go get tested to make sure that everything is OK, and then once they get testing back and they show that they are negative, they’re able to return.”

Similar to what the Virginia High School League has done with public schools, there will be some rule changes to how Fuqua’s games will be played in an effort to avoid situations where physical contact could lead to transmission of the novel coronavirus. This includes the elimination of tipoffs.

“It’s been kind of weird reading some of this stuff,” Edwards said. “So, no tipoffs, visiting team automatically gets the ball, coin flip if it’s overtime. So I feel like we’re mixing some football rules with basketball, but as long as we’re continuing to do what’s necessary to keep our kids safe, keep the school open and still be able to participate in athletics, we’ll do whatever we can.”

The 2020-21 Falcons will play an abbreviated nine-game regular season, taking on each one of their new conference mates once in the Virginia Colonial Conference (VCC).

However, the 2020-21 team features several familiar names, including senior Maureon Tisdale-Couch and senior Luke Gee, among others. Also included in the senior class on the team are guards Cody Fulford, Jackson Allen and Rhodes Cooper and forward Zach Eason.

For on-court leadership, Edwards said Fuqua will lean on its seniors.

“We’ll lean on Maureon, we’ll lean on Luke,” he said. “Those two are our captains, so we’re going to lean on them the most. But a lot of these kids I’ve had for two, three years. They know what to expect. They understand when I’m upset, they understand when I’m happy, so it’s going to be a fun (year). We’re going to enjoy this, especially being in a new conference. (We’re) going to take it as a learning experience.”

Evaluating the schedule, Edwards said no particular opponent stands out more than another, but he is looking forward to being able to form rivalries with teams that are not an hour and a half to two hours away.

“It’ll be invitation only for that, so we don’t really understand what that means, what that’s going to look like,” Edwards said.

Perhaps an outstanding performance in the VCC could merit an invitation, but Edwards indicated this is unknown.

“We would like to think so, but I know a lot of our kids on the basketball team, they play football, so I know they’ll be looking forward to playing their senior seasons of football,” he said.

This means he might not even have those players available to play in a state basketball tournament in the event of seasonal overlap between basketball and football.

“Us, as a coaching staff, for all our athletic teams, we want our kids to play as many sports as possible, so I know, once our basketball season ends, I’m going to be on the sideline cheering those guys on for football,” Edwards, who is also Fuqua’s athletics director, said. “So if we get that invitation, we’ll be happy that we got it, but we’re going to move on to the next thing, which will be football for us.”

The Falcons open the basketball season Tuesday, Dec. 8, when they host Brunswick Academy at 6:30 p.m.