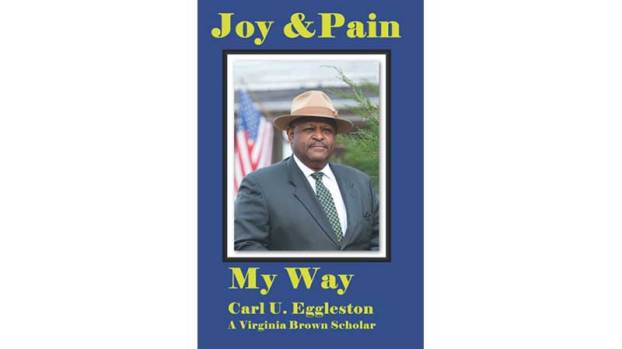 Carl U. Eggleston’s book shares fascinating insights and anecdotes from his life, including the fact that he was honored on the floor of the U.S. House of Representatives in May 2018 by U.S. Rep. Don Beyer.

Carl U. Eggleston has experienced a great deal in his 70 years, from tremendous difficulties to outstanding successes, and he made the decision about four years ago that he wanted to publish a book about them.

“I wanted it to be a snapshot of my life,” he said of the book.

He worked on and off over the last several years to put the volume together, and his efforts culminated in the release of “Joy & Pain: My Way” on Oct. 5, 2020.

“Everything in the book is true,” he said.

The words “joy” and “pain” highlight the highs and lows he has experienced, and he noted that the subtitle, “My Way,” referred to Frank Sinatra’s song, underscoring how Eggleston has navigated the joy and pain in his life — he’s done it his own way.

The difficulties in Eggleston’s life started when he was quite young.

As an African American living in Prince Edward County, he was affected when the public schools in Prince Edward closed in opposition to the order to integrate by the U.S. Supreme Court in the case Brown v. Board of Education.

For two years, he was out of school.

“I just played around in the street,” he said, noting he also worked in his father’s woodworking shop.

The next two years, his parents rented a home in Cumberland County so he could return to school. The fifth year that the Prince Edward public schools were closed, he went to the Prince Edward County Free School, which was funded by a private foundation.

Eggleston experience discrimination later in his life due to race. He got his license to sell real estate, but opportunities were denied to him due to his race.

However, he persisted in the face of difficulty and pursued being a funeral director.

In 1983 in Farmville, Eggleston founded the Carl U. Eggleston Funeral Establishment, of which he is owner and president, but building the business was far from easy.

He said it had no funerals during its first year of operation. It performed one in its second year, and that was his grandfather. Then in year three, he did seven funerals, and in year four, he did 17 or 18.

“It was a slow uphill battle, but I stuck in there, and that’s what I want people to understand,” he said.

He developed political aspirations as a young man that bore significant fruit. He went on to become a member of Farmville Town Council from 1984-88, and he has become a successful political consultant in the Democratic Party.

He joined the campaign of Don Beyer in 1989 when he was running for lieutenant governor in Virginia. Beyer is now serving as the U.S. Representative for Virginia’s 8th congressional district.

Eggleston continued to experience discrimination in the 1980s even as a council member. He recalled that it became an issue who would sit next to him on the council, among other incidents.

But Eggleston makes clear in his book that he is not bitter.

“Seeing how far we have come as a people, a town, a state and a nation gives me the opportunity to reflect; not with bitterness, hatred or vindictiveness, but a clean heart, an optimistic mind and a message of hope,” he writes in the book. “I hold no one today responsible for the actions of people in the past or who are no longer with us. I hope others will read this book and be inspired to overcome any obstacles and use them as a stepping stone to great achievements.”

Eggleston’s book is available for purchase on Amazon.com. The version with a red cover has gray-scaled interior photos, the blue-covered version contains color photos.

The Farmville Town Council has appointed Steven B. Wood as the clerk of council. During the work session meeting on... read more