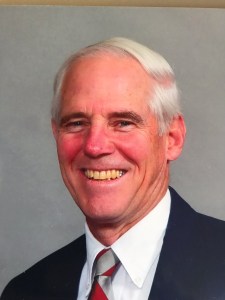 Dr. Ronald Lynton Heinemann passed away unexpectedly on Nov. 18. Ron was a well-loved husband, father, grandfather and professor of American History at Hampden-Sydney College for 52 years. He was an avid Detroit Tigers and Washington Redskins fan, golfer, world traveler and teacher. Ron loved life and his family and will be remembered for his recognizable laugh and wry sense of humor. He was a honorable man of strong beliefs and convictions who delighted in vigorous political debate. Ron not only spoke about the importance of integrity and character but modeled those qualities every day for his students and family. His passion was teaching in the classroom and mentoring students to become “good men and good citizens” through a sound liberal arts education. Born in New York in 1939, Ron grew up in Arlington and was valedictorian at Wakefield H.S. He graduated from Dartmouth College in 1961 where he received his B.A., was Phi Beta Kappa, and a member of Palaeopitus (student government), Phi Delta Theta fraternity and the wrestling team. Following graduation from Dartmouth, Ron entered the United States Navy and served for four years. Ron received his M.A. and Ph.D. from the University of Virginia and began his teaching career at Hampden-Sydney in 1968. Over the years, Ron received numerous awards and recognition for excellence in teaching and research. Twice the graduating seniors from HSC selected him Most Distinguished Professor, and he was later awarded the William Cabell award for excellence in teaching. He was twice awarded the John Peter Mettauer Award for excellence in research. Ron received the David Wilson prize in 1986, the Trustees’ Prize in 1989, the J B Fuqua Award and the Senior Class Award in 1993. In 1993, Ron was inducted into the national honor society, Omicron Delta Kappa, and in 2007 he received the Algernon Sydney Sullivan Award. In 2019, he was honored with the James Madison award by the Wilson Center. Ron authored and co-authored many books on historical figures and events on the history of Virginia, including “Harry Byrd of Virginia.” Ron returned to Dartmouth in 1982-83 to teach and currently was involved in planning for the 60th reunion of his graduating class in June 2021. In addition to his teaching and research, Ron was a leader in faculty governance at Hampden-Sydney. He introduced Senior Fellowships, Freshman Seminars, the Alumni College, the summer term, the first tenure and promotion procedures and was an advocate for coeducation. Ron also had a strong presence in the local community. Over the years, Ron served in leadership positions with FACES, Friends of the Appomattox River, Meals on Wheels, Habitat for Humanity, Moton Museum and on the board of the Virginia Foundation for the Humanities. He was a co-founder of the Prince Edward Youth Soccer program, the first soccer team at the county high school and coached for three years. In 2010, Ron and his wife Sandy established the Ronald L. and Sandra W. Heinemann Scholarship at Hampden-Sydney College. The scholarship is awarded to students with a stellar academic performance who also demonstrate financial need and show an interest in majoring in history. Ron was pre-deceased by his parents Frederick and Edith Heinemann and his brother Robert Heinemann. He is survived by his wife of 58 years, Sandra Wood Heinemann, his children Erica Heinemann McMahon (Matthew McMahon) of Arlington and David Lynton Heinemann (Leslie Morton Heinemann) of Victor, Idaho, and his grandchildren Sydney and Jack McMahon and Rutledge and Brooks Heinemann. A memorial service is planned for the spring. Contributions in Ron’s memory can be given to the Ronald L. and Sandra W. Heinemann Scholarship (alumni.hsc.edu/Heinemann), the College Presbyterian Church or the Joselin Diabetes Center (www.joslin.org). Puckett Funeral Home is serving the family.  www.puckettfh.com.

Goldie Lee Wallace, 90 of Farmville and Tappahannock, passed away on Nov. 20. She was an LPN at Southside Community... read more