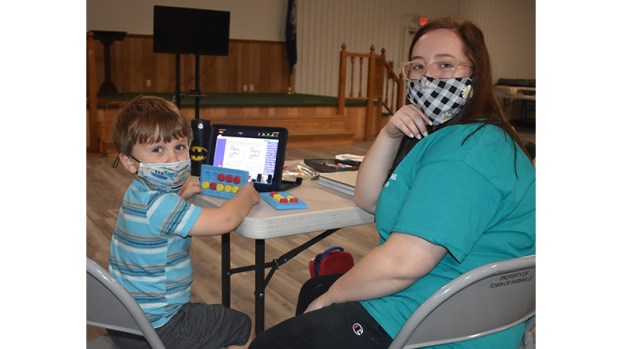 Christopher Eiban, left, benefits from the assistance provided by Counselor Mackenzie Lyons Wednesday morning, Oct. 14, as Christopher participates in the YMCA Beyond the Bell program at the Firemen’s Sports Arena in Farmville. 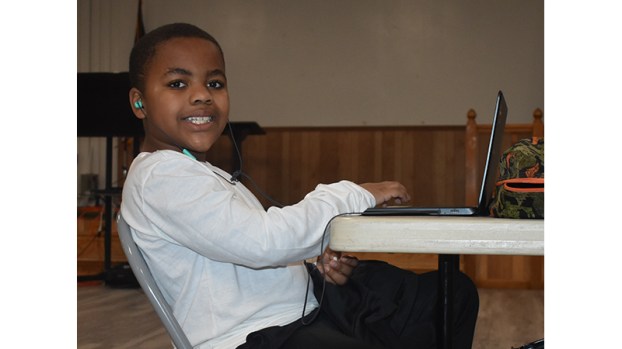 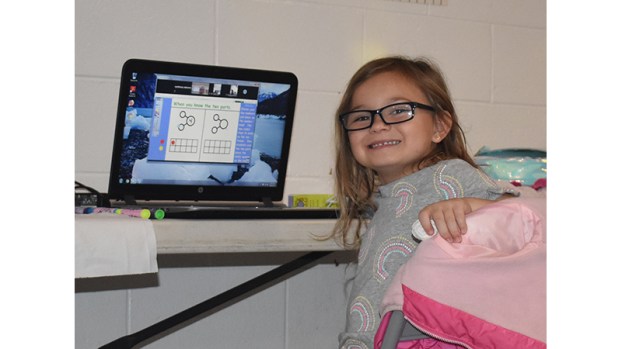 Cynthony Osborne pauses from her work on her computer for a picture as the YMCA Beyond the Bell program progresses. 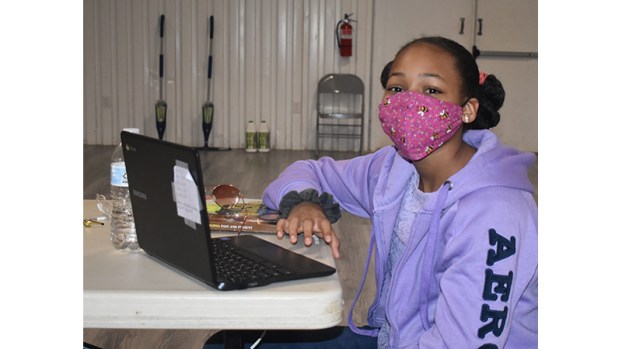 Kyla Barksdale takes part in the Beyond the Bell program while observing the COVID-19 safety measures in place.

The COVID-19 pandemic has presented working parents with nothing short of a monumental challenge.

When leaving the job or working from home are simply not viable options, how can parents consistently ensure their young children are both being cared for and doing their schoolwork while schools are closed to in-person classes?

They needed a bit of a lifeline, and the YMCA answered the call.

The Southside Virginia Family YMCA started the Beyond the Bell program Sept. 14, offering a virtual learning center and full-day child care at the Firemen’s Sports Arena in Farmville.

The program is intended for children ages 5 to12 and runs from 7 a.m. to 6 p.m. Breakfast and lunch are included, there is time devoted for virtual coursework and outdoor recreation, arts and crafts are offered as well as STEAM (Science, Technology, Engineering, Arts and Math) activities.

“A lot of families, especially if they’re single parents or both working parents, they budget for child care in the summertime,” YMCA Family Center Director Josh Gravette said. “They understand that they need that. But in the wintertime and in the fall and during the school year, they depend on their kids going to school, and child care is not cheap.

“We saw a need there, which we’ve always seen that need in child care before COVID,” he continued. “But with COVID, I’d been talking with the town and the county a little bit about what we (could) do.”

To accommodate more than a few children while maintaining social distancing, Southside Virginia Family YMCA needed more space than was available in its facility, where it hosted a summer camp this summer, but for only five to six children.

For Beyond the Bell, the Town of Farmville has allowed the YMCA the use of the Firemen’s Sports Arena, and Prince Edward County has been able to help fund some scholarships for children to be in the program.

“But one thing we do at the Y is we never turn a kid away,” Gravette said. “If they need care, we’ll figure out a way to get them in there. With that going on, luckily the county has stepped up to help with those scholarships of kids from Prince Edward County as well, which is really taking some of that burden from off the Y. So we’ve been able to serve these kids from these families.”

Some families live outside the county, though, commuting to the area for work. This is the case for the Thacker family.

Jenny Thacker is the manager of patient access at Centra Southside Community Hospital, and her 6-year-old son, Jackson Thacker, is participating in the YMCA Beyond the Bell program.

“It has been such a blessing,” Jenny said of the program. “Prior to it starting, we were having to cram two-and-a-half hours worth of class and his homework into about an hour and a half in the evenings due to our commute, because I do not live in Farmville. I live in Nelson (County).”

The commute is 54 minutes one way, making her eight-hour shifts at the hospital more like 10 hours, and prior to Beyond the Bell, even more commute time was necessary to drop off her two children at their respective destinations.

“I have a 6-month-old son that goes to day care, so I was having to go and drive into Amherst and drop my 6-year-old off and then have to drive to Appomattox to drop the baby off and then come to Farmville,” she said. “So we were leaving the house at 6 a.m.”

For about five weeks before the YMCA initiated its program, this was the Thacker family’s schedule during the week, followed by intensive school work in the evening.

“One of the last evenings before the Y started, Jackson was upset,” Jenny said. “We were having a hard time, and he just said, ‘Momma, you don’t ever play with me anymore,’ and it really hit me, because our evenings were just school now. It was eating and class.”

All work and no play was understandably difficult for a 6-year-old boy.

But that has all changed now, as he spends weekdays at the Firemen’s Sports Arena.

“He absolutely loves it there,” Jenny said. “He says he wishes he could live there.”

And not only is Jackson enjoying the activities offered, but he is also successfully completing his school work.

“Oh, yeah, he gets it all done,” Jenny said. “They are so wonderful there. Even the teacher has said out of the children in her class that are going to different day cares in the Nelson area or wherever that the Y has been the most helpful. They message her if they’re having technical difficulties. They really make sure Jackson is getting his work done. They’ve been nothing short of amazing.”

Gravette said the program’s counselors have done a great job keeping the kids on track.

“We have a huge chart in the building that has everybody’s class schedules on it color coded, (noting) who needs to be on their computer and when,” he said.

This has transformed life for Jenny Thacker and her family, particularly after she gets off work each day.

“We get to actually enjoy our evenings,” she said.

Gravette said that when the program started, there were 12 children registered. As of Tuesday, Oct. 13, the number had increased to 23, with between 15 and 20 attending on any given day, showing that Beyond the Bell is growing.

“I think some people are still a little nervous as I think we all are, because there’s a lot of unknowns, but I think the families who’ve come in to see the program who have been a little nervous, as soon as they walk in and see the masks and see the social distancing and the sanitizing that we’re doing, I think it’s really helped them feel more comfortable bringing their child to this program,” he said.

He stated the YMCA will absolutely continue to offer this program until in-person classes resume.

“As long as the need is there, we’re going to continue to serve in that capacity,” he said.