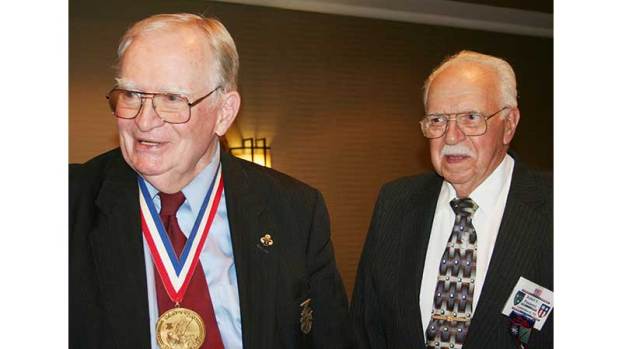 The late and retired Lt. Gen. Samuel Vaughan Wilson, left, and Robert “Bob” Passanisi were among Merrill's Marauders, all of whom will be honored with a Congressional Gold Medal. 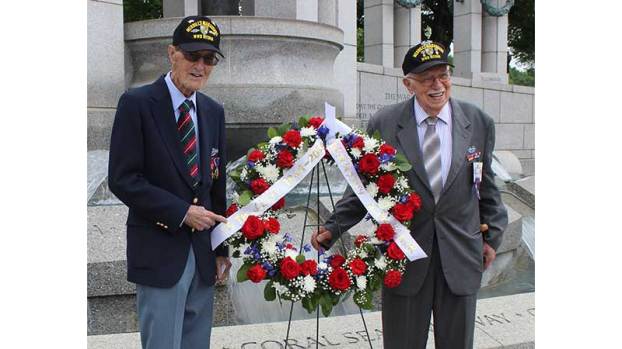 Merrill’s Marauders Gilbert Howland, left, from New Jersey, and Robert “Bob” Passanisi, from New York, place a wreath at the China-Burma-India Monument at the World War II Memorial. The two men, both in their late 90s, have made three trips to Washington, D.C., during the past two years, seeking support from senators and representatives for the Congressional Gold Medal being awarded to their World War II unit, which was known as Merrill’s Marauders. 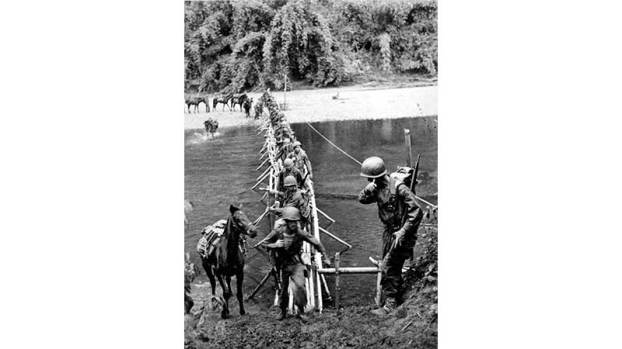 The lines on the chest of the Merrill’s Marauder crossing the Tanai River with the 2nd Battalion are his ribs showing. That was March 18, 1944 — before the siege of Nphum Ga and before climbing the disease-infested 6,100-foot Naura Hkyat Pass in the Himalayas on the march to capture the all-weather airfield at Myitkyina, Burma.

Among Merrill’s Marauders was the late and retired Lt. Gen. Samuel Vaughan Wilson, who is a former president of Hampden-Sydney College.

“I feel like I’m floating on air,” Robert “Bob” Passanisi, 96, said from his home in Lindenhurst, New York, shortly after the legislation passed. “I am thrilled beyond words.”

Passanisi, the Marauder spokesperson and historian, is one of only eight still living out of almost 3,000 infantrymen who volunteered from the Caribbean, U.S. and South Pacific battlefields for a “dangerous and hazardous” mission in 1943.

“It has been a long journey, and we’ve had to struggle through three Congressional sessions to obtain this great honor,” Passanisi said. “Reaching this goal was not unlike our 1944 mission in Burma.”

Congress passing the legislation came one day after the 77th anniversary of 2,000 unnamed volunteers from the Caribbean and U.S. boarding the S.S. Lurline Sept. 21, 1943, in San Francisco to ship out to New Caledonia to pick up almost 1,000 volunteers from South Pacific battles before heading to their unknown destination and mission.

Gen. George C. Marshall, then Army chief of staff, said the Marauder mission against “large numbers of the enemy with few resources was unmatched in any theater.”

Carrying only what they could pack on their backs and mules, they defeated the much larger and better equipped elite Japanese 18th division in five major battles and 30 minor engagements.

They walked farther than any World War II fighting force — almost 1,000 miles — to complete their mission of seizing northern Burma’s Myitkyina airstrip May 17, 1944.

World leaders at the time called their mission impossible. Yet nothing could stop them. They “put one foot in front of the other” and battled not only the enemy but malaria, mite typhus, dysentery, monsoons, isolation and an accumulation of everything. Victory came at great cost. Only about 200 walking skeletons were capable of combat when they reached the airfield.

“We came together with one single mindset — to accomplish the impossible,” Passanisi said about the men he served with in the 5307th Composite Unit Provisional, the unit’s official designation. “My one regret is that only eight of us are alive to enjoy this historic honor.”

Marauder Gilbert H. Howland, 96, from Hamilton, New Jersey, and Passanisi were a two-man team who visited Congress three times during this session to gain support from senators and representatives.

Two of those trips were planned by Fred Eames, attorney with Hunton Andrews Kurth LLP, in Washington, D.C., who put together a pro bono legal team of volunteers from his firm, with assistance from Scott Stone, S2C Pacific in Illinois and Bracewell LLP in Washington.

“The Congressional Gold Medal gives them the recognition they deserve,” Eames said. “We were honored to have assisted in getting it across the finish line.”

“It is a great honor for me and our unit,” Howland said. “We all volunteered and came together as a team to complete our mission. I wish all those men were alive today to receive this honor.

“I fought in World War II, in Korea in the Pork Chop Hill sector and did two combat tours in Vietnam. But the worst fighting I experienced was in Burma with Merrill’s Marauders.”

Merrill’s Marauders have been called everything from “misfits to magnificent.” They hailed from every state in the nation. There included 15 ethnic groups, including a Native American code talker. The oldest was a World War I veteran of the Canadian Black Watch Highlanders. The youngest was 14 when he enlisted.

“General Sam,” as Wilson was affectionately called by friends, lied about his age and joined the National Guard in Virginia at the age of 16. He served in the Army longer than any Merrill’s Marauder — almost four decades — and was responsible for helping create Delta Force, the Army’s premiere anti-terrorism unit.

Most of his Army service was in military intelligence. He served as director of the Defense Intelligence Agency and was also an adviser to five U.S. presidents.

All his memorabilia is archived at Hampden-Sydney’s Wilson Center for Leadership, named in his honor.