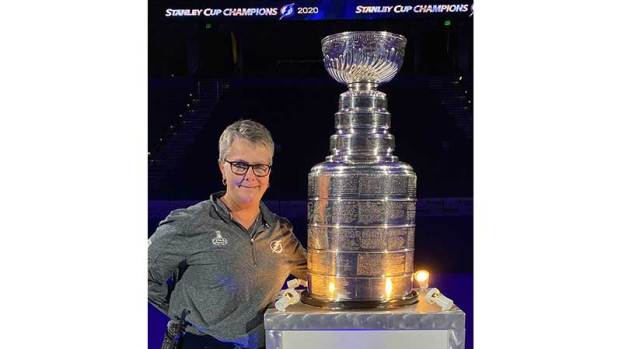 Tampa Bay Lightning Senior Vice President for Guest Experience Mary Milne, a 1983 graduate of Longwood, stands with the Stanley Cup, which the Lightning won this year.

Few people have the privilege of winning a Stanley Cup. During her 20-plus years with the Tampa Bay Lightning in the National Hockey League (NHL), Longwood University alumna Mary Milne, a 1983 graduate, has done it twice.

A former Longwood field hockey standout, Milne is preparing for her 21st year with the Lightning, one of the most successful and popular franchises in the NHL. She currently serves as the senior vice president for guest experience, managing more than 700 employees — or “teammates,” in her words — and overseeing the organization’s “front of house” departments. That’s parking, security, suites, guest services and a host of other departments within Amelie Arena — nearly everything a fan encounters at a Lightning game.

Beyond the consistent success the Lightning have found on the ice — including the 2004 and 2020 Stanley Cups — the team annually ranks near the top of the NHL in attendance, routinely selling out its home arena in Tampa, Florida. Since 2016, the team has averaged a season-long sellout crowd of 19,092 fans per game four times, and last year they were the third-most-attended of the league’s 24 American franchises.

That makes Milne’s guest services team a key piece of the Tampa Bay organization and her position at the top critical to the franchise’s success. She gives some of the credit to her time as a student-athlete at Longwood, where she developed skills and a mindset that she still relies on today.

“A lot of the things I learned at Longwood have allowed me to be successful in a lot of other ways,” Milne, a native of Vienna, said, as one who also graduated with a bachelor’s degree in health and physical education from Longwood and went on to earn her master’s in sports administration from Eastern Kentucky University.

“By being an athlete, I learned how to build teams, how to work with people, the value of relationships and how you treat everyone,” Milne, who also has experience as a college field hockey coach, said. “On campus at Longwood, you spoke to everyone you walked past, and that doesn’t happen everywhere. That’s something I still live by. Trust me, my ability to walk through the building and talk to anybody is something I learned at Longwood, but it’s critical to my success right now.”

“I’ve seen the drive for a championship from the perspective of an athlete and coach, as well as an employee,” she said. “I can tell you, from all of them, it’s emotionally very similar. The work you do is certainly different, but the excitement and the sense of accomplishment is just as significant.”