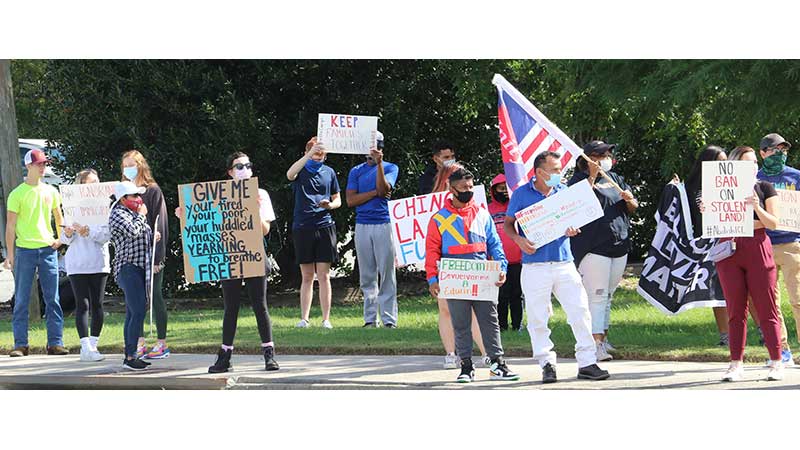 Demonstrators gathered peacefully Friday afternoon, Oct. 2, along West Third Street in Farmville in front of Wilck’s Lake Park to protest against U.S. Immigration and Customs Enforcement (ICE) facilities across the country, including the facility in Farmville. Protestors chanted their opposition to ICE and walked up and down West Third Street between the Wilck’s Lake Park parking lot and the Barbara Rose Johns Farmville-Prince Edward Community Library.

Kaine has been a vocal supporter of the Farmville community regarding concerns throughout the pandemic of coronavirus mitigation at the Immigration Centers of America (ICA) Farmville detention center.

Last month, Kaine, along with Sens. Mark Warner and Patty Murray, sent a letter requesting an investigation into the June transfer of detainees in U.S. Immigration and Customs Enforcement (ICE) detention facilities in Arizona and Florida to Farmville, which ultimately caused a large outbreak that saw the majority of inmates at ICA Farmville test positive for the virus.

On Friday, Kaine spoke with local leaders to discuss both the local ICE facility and the effects of the coronavirus throughout the area.

The senator discussed a recent report published by the Centers for Disease Control and Prevention (CDC) regarding virus mitigation at ICA Farmville, citing some of the report’s key recommendations as improvements on distance between inmates and a need for improvement in the amount of time passing between when an inmate is tested and when that test result is returned.

Nash said in his understanding the current population of ICA Farmville is approximately 200 inmates. He added the facility has a capacity of approximately 700.

“What they have conveyed to me in conversations in compliance with the recommendations from CDC is distributing that population more evenly through what were previously their vacant wards, so they’re trying to build in that social distancing due to their decreased population at this time. How long that can be sustainable is a question that only homeland security will determine.

Friday’s call gave local officials a chance to provide the senator with a Farmville-based perspective on the coronavirus’ toll on the community.

Tom Angelou, CEO of Centra Southside Community Hospital in Farmville, told Kaine he hoped the detention center would make efforts in the future to ensure an employee is on site who can perform fit testing for N-95 masks to help make sure personal protective equipment (PPE) is properly used at the facility. He also hoped overall education about the virus would be on the forefront of plans to address the potential for future spread.

Angelou told Kaine Centra’s average coronavirus patient census at the hospital initially hovered around four early on in the pandemic. He said while the hospital saw its largest number in the mid-teens in late August/early September, this has been Centra’s “best week yet,” and numbers appear to be leveling out.

Prince Edward Assistant County Administrator Sarah Puckett joined Friday’s call to chime in on initial local concern during the pandemic that an outbreak at the detention center could put a strain on first responders and the community health care system.

While the county escaped this possibility during the summer, a second outbreak could bring those concerns back to light.

“We have to have the capacity to care for the detainees, for the employees, but also for the community,” Puckett said. “There was great concern about the possibility we may be overwhelmed both from transport capability and hospital facility capability.”

Deanna Jones, executive director at Prince Edward Rescue Squad, said volunteerism at the squad was reduced by half after the pandemic.

Volunteerism was already a dying breed, then you add in an outbreak and it really hinders people’s willingness to jump on a truck and do something for free with such huge risks.”

Puckett also referenced federal CARES Act funding, asking Kaine for assistance in the possible extension of funding allocations set to expire at the end of the year. Puckett said the county has focused much of that funding on immediate needs of COVID-necessary expenditures. While money has been allocated in a variety of ways, she said, officials have more money to spend and would be better suited without an arbitrary deadline of Dec. 30.

“It would be tremendously meaningful I think to all local governments in Virginia if that deadline for the current allocation that we have could be extended.”

Sharon Harrup, CEO at STEPS, Inc., said over the past two months the organization has received two calls in the middle of the night from law enforcement or possible case managers working with the ICA facility regarding discharged ICE detainees who had tested positive for COVID-19 but had nowhere to go after being released.

“So they were calling us to see if we could assist with some sort of shelter situation,” Harrup said. “Our only shelter would be hotels, and just for the concern for the health of our community, we basically stepped away from that situation.”

Harrup said she hoped to see development of a local connection and collaboration for discharge planning of detainees.

Nash added public health officials have found issues with ICE’s discharging of detainees into the population.

“When they’re released, they’re released,” he said. “We don’t know if they’re positive or negative or their test results are pending. As soon as they’re bonded out or a federal immigration judge deems them fit for release, they’re out the door. We have no address. We have no idea where they’re going. We’re lucky if we have a name.”

Town Manager Scott Davis noted it has always been the Town of Farmville’s understanding in discussions with ICA Farmville that local detainees are not released into the Farmville community.