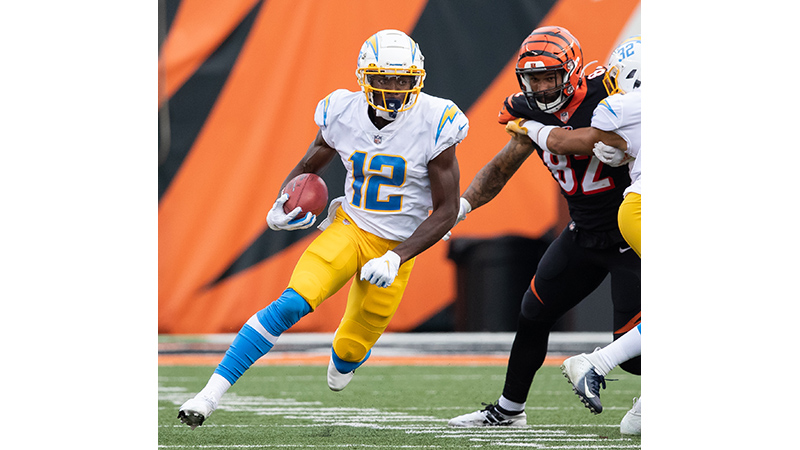 Sunday, Sept. 13, was a momentous day for Joe Reed, his family, friends and all of Charlotte County.

Reed, who grew up in Charlotte County, made his debut in the National Football League.

It was an occasion that had been intensely anticipated ever since Reed was drafted in the fifth round by the Los Angeles Chargers back in April.

And likely to no one’s surprise in Charlotte County, Reed did not simply show up for his first NFL game. He made a play that proved key to helping the Chargers win.

With L.A. trailing 13-6 to the host Cincinnati Bengals late in the third quarter, Reed, with his signature, assured stride, took his first-ever kickoff return 46 yards to give the Chargers offense excellent field position. It set up L.A.’s only touchdown of the game — a 5-yard run by rookie running back Joshua Kelley.

The extra point tied the game at 13-13, and the Chargers went on to win 16-13 at Paul Brown Stadium in Cincinnati.

Sunday’s game was unusual because due to safety regulations related to the COVID-19 pandemic, the Chargers and Bengals had to play in an empty stadium. Additionally it was the first playing time either team had seen since last season because the 2020 preseason was canceled due to the pandemic.

However, none of this changed the fact that the game in Cincinnati was a genuine NFL game, Reed’s first, and he described what it was like being out there.

“Man, it was definitely a dream come true,” he said. “I got off the bus thankful, just thinking about my journey getting to this point. Regardless of not having a preseason and not having fans (in the stands), I just let my drive and hard work take over to get me to this point. So, I’m definitely thankful (for) being in this situation and excited moving forward.”

He said his first time on the field in Sunday’s game was as a member of the Chargers’ special teams for a punt in the first quarter. He estimated that for the game, he had eight on-field appearances with special teams and about the same amount with the offense.

Not lost on Reed is the significance of his football journey that has gone from Charlotte County youth league play, to Randolph-Henry High School, to the University of Virginia to now the highest professional level possible.

“That’s something I think about every day, especially talking to former teammates and talking to my friends back at home,” he said. “We actually talk about that a lot. I was actually just talking to one of my old teammates about practicing behind the (Early Learning Center) ELC, playing for the (Charlotte County) Patriots.”

Reed heard a good bit from his friends back home in Charlotte County after Sunday’s game.

“I have a great, great amount of support back home, especially from my former classmates,” he said. “They text me before and after the games, and that really helps me a lot, just them reaching out to me.”

Reed’s family members were not at Sunday’s game in person due to the COVID-19 regulations, but they were definitely tuned in back at home, and he talked to his parents right after the game.

“I sent them a couple pictures of me in the uniform, and they’re super proud of me too,” he said.

His father, Carlton Reed, described Sunday and seeing Joe out on the NFL gridiron for the first time as overwhelming.

“It was a day off for me, but I actually went to work to keep my mind occupied till game time,” he said. “I know when the boys were home, that was the thing on Sundays — we’d get to church and be looking at our clock, because (we) can’t wait till service is over to go watch the games. I’ve got a child that’s in the NFL now, so the anticipation was overwhelming.

“And as far as watching the game, I watched it like if it was anyone else out there,” he said. “I’m not much of an outside cheerer, but I expressed myself inside. I was very happy. I’m very pleased to watch him out there doing something that he dreamed of. Everything’s coming together for him.”

“I don’t like the fact that he ran out of bounds on his own and he created a penalty on special teams,” Lynn said. “But the one kick return that he had, that’s what Joe can do. We needed that field position, and he put the offense in great shape to put points on the board.

The coach noted Reed is a threat on special teams.

“We want to get him more involved as he grows in this offense, doing some special things,” Lynn said. “We love Joe as an athlete, but right now, his primary role is going to be three core special teams guy and backup receiver, and the guy can play some running back as well. Love his versatility.”

Even in 2020, Lancers built to overcome adversity