COLUMN — Possessed with a pickling passion 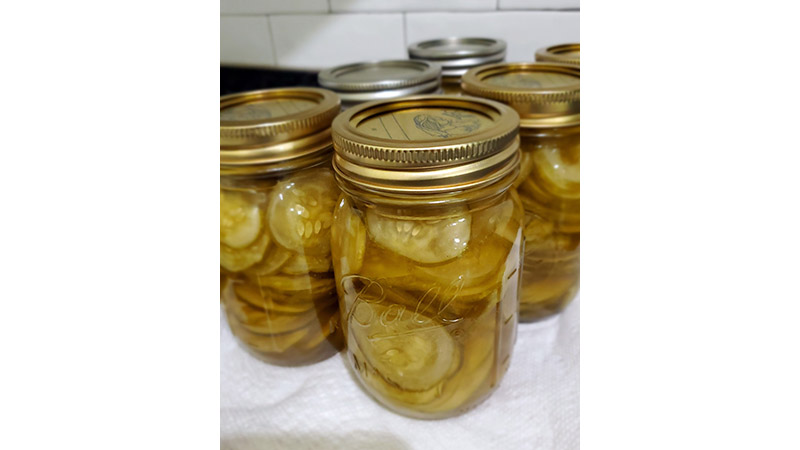 Crispy, crunchy, sweet and spicy. Cucumber pickles are an excellent addition to most sandwiches.

Every summer when I was a kid, my mother and grandmother would become obsessed with the need to can, pickle, and preserve everything in sight.

Nothing was safe from them. Watermelon pickle? Definitely. Green tomato pickle and relish? Yes. Cantaloupe pickle? Afraid so. My grandmother claimed she had once made tomato wine and that it was a fine tipple. Anything, she said, could be turned into wine.

Cucumber pickle was one of their standards. They filled huge crocks with brine and raw cucumber slices and let them ferment for three weeks or so. Every day they would check the salinity of the brine by floating an egg in it. At the end of the brining, they would soak the cucumber slices in an alum solution, wash them, and then simmer them in a heady sugar, spice, and vinegar solution. Eventually the resulting pickles would be packed in jars, processed in a hot water bath and stored for later consumption. I vowed to never, ever make pickles with this recipe. It’s messy, stinky, and how many pickles can a family of four eat?

Well, for some unknown reason, I was possessed with an irrational urge to make pickles this summer. All kinds of pickles. Spicy cherries with cinnamon, cloves and mustard seeds. Peaches with ginger, cardamom, cloves and black pepper corns. Green tomatoes with onions, garlic, celery seeds and red chilies. And, yes, cucumber pickle – thinly sliced, super crispy and both sweet and fiery. Not exactly my mother’s pickles.

There was only one problem. I needed pickling lime, pickling salt, jars, and lids. Especially jars and lids. What I discovered was that apparently the entire local population had been struck by the same irrational urge to pickle that was afflicting me. Who knew? I went to five stores before I found pickling lime and pickling salt (non-iodized kosher salt works just fine too). I searched everywhere for jars – here, Richmond, my secret stash in the garage, online, even with friends and neighbors. Stores everywhere were sold out, and managers said that they were unable to get in new supplies. There were some jars available online, but for crazy prices. Nearly $100.00 for a dozen pint jars? No. I began to feel like a hunter-gatherer during a very lean season.

After about 10 days of frantic searching, I finally had everything I needed for making pickles, and so the fun began. For the cucumber pickle, I used a three-day recipe that involved soaking the cucumber slices in lime water, rinsing them, soaking in cold water and then making a spicy sugar and vinegar syrup in which the cucumber slices were very briefly simmered before being packed into jars and processed in a hot water bath. The sound of the lids popping when they sealed was gratifying. My mother and grandmother refused to allow anyone to taste their pickles until Thanksgiving. They claimed that time was needed for the flavors to meld. We waited 24 hours, and the flavors were just fine. No need for more melding.

The cherries, green tomatoes and peaches were all much easier. I even managed to con my husband into helping with them. We got everything finished without any epic disasters. No fruit on the ceiling, no broken jars, no burned hands. So, now we’ve decided to make pickled pear slices with cassis. Who knows what else we might try?

I’m not exactly sure why so many of us this summer were consumed with the need to preserve food. Perhaps it was a response to the pandemic and a need to go back to basics. Perhaps preserving food makes us all feel safer.

In the meantime, if you need any jars for your own projects, just let me know. I now have a small stash and am willing to share. I won’t even make you meet me in a dark alley for the transfer of the jars.

DR. CYNTHIA WOOD is a master gardener. Her email address is cynthia. crewe23930@gmail.com.

How to survive hot, dry summers in the garden