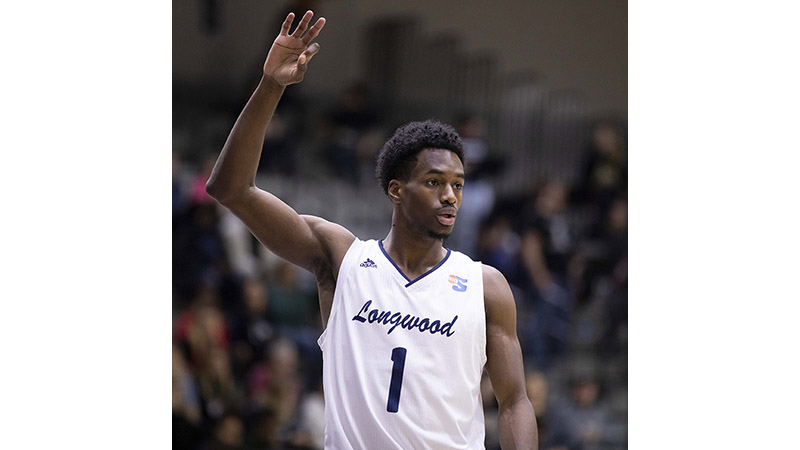 Christian Wilson is a man of many talents. The junior forward proved just that during his debut season with Longwood University’s men’s basketball team in 2019-20 when he emerged as one of the Big South Conference’s best reserves and played a key role in helping the Lancers to a program-record fourth-place finish in the conference standings.

But thanks to the COMM 410 “Digital and Social Media Technology” class he took this summer with Dr. Ryan Stouffer, people have gotten to know Wilson in a new light and seen another one of his developing talents in the process.

Already a scorer and facilitator on the court, a leader in the locker room and a communication studies major in the classroom, Wilson can now add the moniker of blogger to his growing list of titles.

As part of the course, Stouffer tasked Wilson and his fellow students with creating a personal blog whose subject matter would be open-ended and up to the author. Ever eloquent and insightful in postgame interviews, Wilson decided to tackle the subject of being a collegiate athlete in the midst of a pandemic, a subject with which he has been intimately familiar since the NCAA took the unprecedented step of canceling the 2020 NCAA Tournament in March.

For his first topic, he turned his attention to two intersecting subjects that have affected nearly every step since March: basketball and COVID-19. A native of the Queens borough of New York City, he has seen first-hand how the COVID-19 pandemic could wreak havoc on a community, let alone an entire city. Also a Division I athlete, however, Wilson was wrestling with a desire to return to a sport he loved and that had long been interwoven into his personal identity.

The result was an authentic take on the conflict of those two sentiments, titled “The Return of Hoops?” It was his first blog post, but it earned him positive feedback from his peers and Dr. Stouffer, as well as inquiries from a newfound audience as to when he would publish his second piece. A week later he followed up with another entry, “Is Time Running Out for the NCAA,?” giving more perspective on how the pandemic was affecting his experience as a collegiate athlete and as a fan of sports in general.

The response to the first two pieces was equally as encouraging, giving him the confidence to make a hard pivot in his subject matter. Instead of more insight into Longwood basketball’s COVID-19-affected preseason, Wilson turned the attention of his third entry to the racial unrest that gripped the country after the death of George Floyd in May, the Black Lives Matter movement and his own relevant experiences — “BLM: A Culture Shift Beyond Sports.”

And while that topic has proven to be a flashpoint for contention among many in the country, Wilson had become confident enough in his voice and his writing to approach the issue with the same unflinching confidence he displayed on the court throughout his sophomore season.

“I didn’t have any hesitation putting my thoughts out there,” he said. “I feel like a big part of that was looking at professional athletes like LeBron James, Colin Kaepernick, Chris Paul, Serena Williams. One thing they keep saying is that this is about everyone, that everyone has a voice. I may not have the platform they have and the ability to reach millions of people like they do, but I can still reach a few on campus, a few in my neighborhood, a few strangers that may know me only because I’m a basketball player.”

With a strengthening grasp of the written word as his medium, his aim for the third piece was to not only share his feelings on the topic, but also use his platform as an athlete and blogger to offer perspective to his readers. That’s when the light bulb clicked on for Wilson. He realized that with the natural attention he garnered as a Division I athlete, he could use his voice as a force for positive change.

“If I can give them new information or a new perspective to open their eyes, then I have done my job,” he said.

“Christian did a great job taking a big-picture issue and telling it through his point of view,” Stouffer said. “The goal with the assignment is to establish your personal voice and storytelling abilities, and Christian nailed that with a very informative, very personal look at Black Lives Matter.”

Wilson capped his four-piece blog series by covering the world of professional sports and the return of several leagues, including the NBA, WNBA and Major League Baseball in “What’s Next?” His theme for that last one was the uncertainty surrounding each of those leagues and sports in general, including the college basketball season that he and his Lancer teammates were on campus training for at the time.

But even while commenting on the uncertainty surrounding his own life and that of the entire country, Wilson noted he was certain there is more writing in his future.

“I’m still learning a lot about writing and how to communicate effectively through my writing, but I do know I enjoyed it,” he said. “The key to it was being authentic. I never changed up the tone of my writing or did anything different just to get more views. If a post only got 10 views, I was cool with it. As long as I put out content that was authentic, I could live with however many people saw it.”