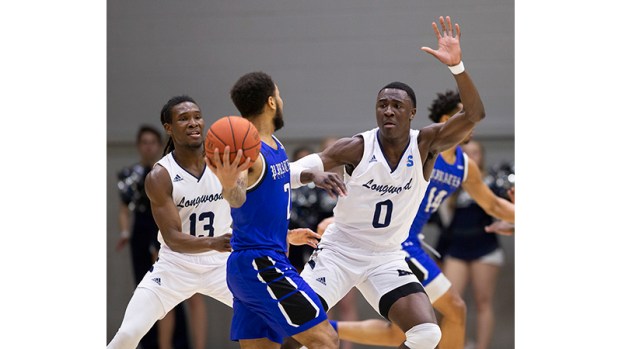 Longwood University guard Heru Bligen, No. 13, and forward Leslie Nkereuwem, No. 0, apply defensive pressure last season. They have helped the Lancers exhibit their trademark grit during a difficult offseason shaped by the COVID-19 pandemic. (Photo courtesy of Mike Kropf/Longwood University)

Even in 2020, Lancers built to overcome adversity

Longwood University’s men’s basketball team has demonstrated time and time again under Head Coach Griff Aldrich a penchant for overcoming adversity, rallying from midseason hardships to make history in each of the past two seasons.

The 2020-21 season is shaping up to be no different. The Lancers are just getting started a bit sooner.

Coming off a milestone 2019-20 season in which it earned a program-record fourth-place finish in the Big South, Longwood entered its annual summer workouts mired in uncertainty. Familiar faces were taking on new roles, a crop of senior leaders had moved on and the team was in reboot mode after being more than four months removed from an end-of-season run that saw it win eight of its final 12 games.

That’s not even taking into account a global pandemic that had forced the cancellation of the NCAA Tournament and a mid-year suspension of the NBA season in March and has now cast a pall on the entirety of the upcoming college athletics season.

Amid 2020’s unique brand of adversity, Longwood basketball found itself on the familiar unsteady ground of uncertainty; and once again, the Lancers have pushed forward to find steady footing. Now, with the first phase of a socially distant preseason behind them and the second well underway this fall, Aldrich’s newest edition of the Lancers is moving forward to continue building upon two years’ worth of momentum that has the program on the rise.

“I thought we had a great summer,” Aldrich, who is entering his third year at the helm of the program, said. “It feels like we do this every year, but we’re adding so many new pieces. In some respects this year is different in that we lost so many key contributors from last year. But with guys like Nate Lliteras and Bennett Mohn, who were here but redshirted last year, and adding four new players, having all of them in the mix is different.”

Integrating new players into the fabric of a team culture and smoothing out the wrinkles created by graduation and departures is a challenge that all programs face at the start of every season, even under normal circumstances. Doing it in an environment like Longwood faced this summer proved to be especially challenging, Aldrich said.

But working in Longwood’s favor in 2020 is the culture established by Aldrich and the team at large, grounded in a mentality that stresses commitment to process, rather than results. That culture has been two years in the making since Aldrich took over in March of 2018, and it was an underlying theme from the minute each player set foot back on campus this past July.

As a result, even with masked practices, socially distant lifts, persistent symptom screenings, new personnel and redistributed responsibilities, the 2020-21 Lancers have already begun to not only form the identity of their team, but strengthen that of their entire program as well.

Unselfishness and cohesion have been trademarks of Aldrich’s first two Longwood teams, and that mentality has yielded a host of firsts for the program since he took over in March 2018. Even without a dominant scorer — Shabooty Phillips led the team with 14.8 points per game in 2018-19, and Juan Munoz with 10.4 in 2019-20 — the Lancers’ time under Aldrich has already produced the program’s first-ever Division I postseason tournament berth and postseason win in 2018-19, and a program-record nine Big South wins and a top-four league finish last season.

The program reached those milestones with an on-court approach grounded in ball movement, three-point shooting and principled execution on both ends of the floor. In each of their first two years, commitment to those principles has allowed them to break out of mid-year slumps and end the season on high notes, giving credence to the process-over-result mentality Aldrich hammers home daily.

Aldrich’s first two teams have been able to find that success with rosters made up of versatile players and a deep bench, and his third edition of the Lancers is shaping up to be the same. And while only one of Longwood’s returners is a senior — 6-foot-11-inch forward Ilija Stefanovic — that group retains plenty of experience despite saying goodbye to the four-man senior class of Phillips, Sean Flood, JaShaun Smith and Jaylon Wilson.

Leading the way in their place alongside Stefanovic will be the junior trio of Munoz, DeShaun Wade and Christian Wilson, who teamed up to emerge as three of Longwood’s top contributors one year ago.

Along with their experience, the 2020-21 Lancers are also supersized. With an average team height of 6-5, the squad boasts nine players that height or taller, two 6-10 or above, and a wealth of long, sharp-shooting swingmen capable of creating mismatches both inside and out. With the exception of Munoz, who last year joined the elite tier of Big South point guards by capping his sophomore season with a second-half surge, every player on Longwood’s 2020-21 roster has been recruited by Aldrich and his staff to fit within his vision for the program, which is ever clearer heading into his third year at the helm.

But for all the on-court success, milestones and big moments in Willett Hall the team has generated since 2018, the driving force behind the rise of the Lancers has taken place behind the scenes. With a culture built upon the “Longwood Five” — excellence, humility, grit, gratitude and service — Aldrich often credits how his team performs for two hours on game day as a byproduct of the process that occurs in practice, in the locker room, in class, on campus and elsewhere.

Those values, said Aldrich, were just as important to implement and strengthen this summer as any basketball concept.

“The three things we really focused on were, No. 1, trying to re-establish our culture; two, building good chemistry and spending a lot of good time with one another; and three, just working on skills,” he said. “I think we were successful in all three. The guys worked really hard. From that perspective, we built really good culture and re-established some of the core values we try to promote.”

Wilson, who in his first season with the program in 2019-20 took the mantle of one of the Big South’s top bench contributors, echoed that focus.

“We’re big on culture,” Wilson said. “We wanted to get the new guys acclimated to that, get them used to working hard, being on time, doing things the right way and focusing on the process and not so much the result.”

If there were ever a preseason to steer focus away from immediate results, 2020 has been it. In the midst of the global COVID-19 pandemic, the Lancers’ basketball activities were severely limited over the summer and continue to be restricted even now that Longwood’s campus has returned to in-person learning for the fall.

And while COVID-19 testing, routine screening, and social distancing efforts ensured that the team’s activities were conducted in a safe manner, they looked much different than Aldrich would have liked.

But even with that adversity, the Lancers are still getting plenty out of it.

“Typically we would do more team-oriented workouts that would be melded together with individual workouts, but here it was almost exclusively individual,” he said. “While we were limited, what it did was give the guys a real opportunity to work on their game.”

Aldrich did note that getting through a weeks-long program without a true 5-on-5 scrimmage was challenging but that his team — motivated largely by the prospect of returning to a game they love and teammates whom they had not seen in months — was steadfast in its competitiveness or commitment. They found a dim light at the end of the tunnel in the form of 2-on-2 scrimmages in the final few days of camp, and in the interim took part in a 7,000-shot challenge that every single player on the roster completed, and some obliterated.

“On the basketball side, I feel like we came a long way,” Wilson, who last season averaged 6.2 points and 2.8 rebounds per game as Longwood’s most heavily used reserve, said. “It’s obviously different with no contact and limited contact. We got to work on a lot of things on our offense like spacing and shooting, but there’s nothing like going live and competing. We’re big on competing; it’s one of our core values, and that was one of the hardest things. But we found other ways to compete — side competitions, free throw contests, the 7,000 Club, who was the loudest.

“I give Coach Griff and the whole staff credit because they adapted. The summer days can feel repetitive, but they tried to find ways to make each day and each week a new challenge.”

Now with school back in session and the 2020-21 college basketball season just two months away, the Lancers are enjoying a small taste of normalcy, returning to live competition and balancing life as student-athletes. They are still limited in their training, but overcoming adversity by staying true to the process has been a theme of Longwood basketball for two years running.

This year, they’ll be well-practiced in time for tipoff.

Christian Wilson is a man of many talents. The junior forward proved just that during his debut season with Longwood... read more