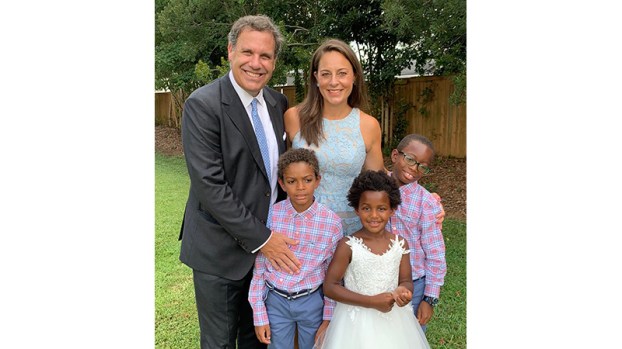 Seeing through a different lens

The 27 citizens who came before the Farmville Town Council during a Wednesday, Aug. 19, public hearing offered thoughts on the town’s Confederate Heroes statue from a variety of backgrounds.

One of the most unique perspectives was offered by Longwood University Men’s Basketball Head Coach Griff Aldrich. He did not come representing the university but rather himself as a concerned citizen who lives and works on High Street, a coach of African American players and a father of adopted African American children.

The Aug. 19 meeting was a public hearing, held to discuss the future of the statue as required by a state law allowing local municipalities to remove or recontextualize Confederate statues in their boundaries.

All speakers were given a time limit, and Aldrich opened his comments by thanking the council for its decision to remove the statue.

He shared his history with the Town of Farmville, having attended Hampden-Sydney College, returning to help coach basketball there before moving away again for a period of time and returning in 2018 to become the head coach at Longwood.

“What I’ve found in Farmville is a very welcoming community, a community that values peace and reconciliation,” he said.

He did note, however, that it is a community steeped in racial challenges, difficulties and offenses.

“To me, this statue is, as has been mentioned (by other speakers), another symbol that is offensive to a significant portion of our community,” he said.

“I particularly had a problem with the statue because it’s not directed to any individual person. Secondly, it references heroism. That necessarily means that’s celebrating the cause for which the Confederate soldiers fought.”

He said any serious-or fair-minded people would understand that slavery, at a minimum, if not the main reason for the Civil War was a central contributing part of it.

He repeated that as such, the town is offending a significant portion of the community, and that this does not seem appropriate, or just or a unifying course of action for any community to continue with.

Then Aldrich focused on how this issue has become personal for him.

“I have three children — (ages) 9, 8 and 5,” he said. “They’re all adopted. They’re all African American. I have to walk these children to my office, which is directly across from that statue.”

Then he addressed the council members directly.

“I would ask you, if your children were African American and you had to explain to them why it is a hero that fought for segregation and for slavery, how you would handle that,” he said.

In a Sunday, Aug. 23, interview, Aldrich shared some additional thoughts on behalf of himself.

“To be honest, I think that the reality is my perspective on race issues has dramatically changed since I’ve had children,” he said.

Being a bridge between communities, he stated, is something he and his wife feel called to, allowing them to advocate in certain ways because they have a different experience.

Though racial issues can be politicized at times, Aldrich made it clear the family decisions he and his wife have made have had nothing to do with politics.

“We adopted our kids because we felt called to, not for any political statement,” he said.

Racial issues have become more personal to him now that they pertain to his children, he stated, but he has also engaged with them as a basketball coach of almost exclusively minority or African American players throughout his career.

“My players are very near and dear to me,” he said. “And we’ve had quite a few conversations as a group and individually with the players about their experiences in recent events and also their experiences as being a student-athlete and a student in Farmville and at Longwood. And being confronted with that has really opened my eyes.”

He said it certainly has caused him to want to use any platform he has as a parent or as a coach to advocate on behalf of his children and players.

“I also think that it’s not lost on me that I’m a white male who will probably be seen differently, and I understand the perspectives of probably a lot of similarly situated individuals, but I have been blessed to have a different experience,” he said. “And it’s been a very rich experience to have African American children, but it’s absolutely transformed my perspective and really allowed me to see things through a different lens.”

As a basketball coach, Aldrich said the topic of the statue on High Street has come up with recruits, alumni and staff members.

“I had freshmen parents of a player who came to drop their son off this weekend, and due to COVID, they had not had an opportunity to come on campus yet,” he said. “And we walked them around, and they stayed at the (Hotel Weyanoke), and he’s an African American player, and they saw the statue, and we had a very open discussion about it.”

Aldrich emphasized how the statue is incongruous with his experience of Farmville.

“I have not experienced with our children overt racist issues during our short time here, and to me, that statue reflects a message that I don’t think is consistent with who we are as a community,” he said.

He also highlighted something he might have said if he had been allowed more time during the public hearing.

The Farmville Town Council has appointed Sherry L. Scoggins as the clerk of council. During a meeting on Wednesday, Aug.19,... read more