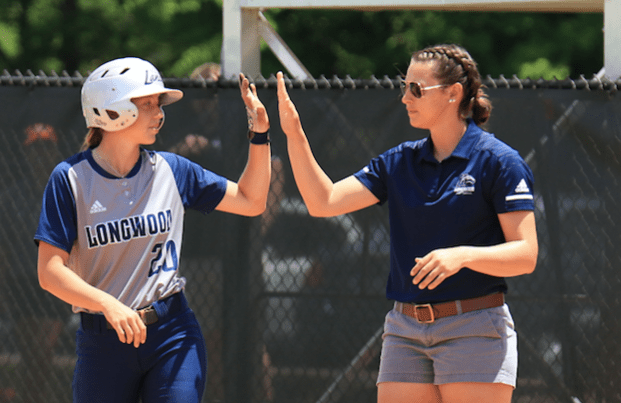 Former Longwood University Softball Assistant Coach Emily Murphy, right, gives a high five to Lancer Kasey Carr after she reached first base. Murphy will bring her experience as an assistant coach in 2017-19 and as Lancers co-head coach in 2020 to the diamond as head coach of Fuqua School’s varsity softball team. (Photo courtesy of Longwood University)

One of the all-time great players in the history of Longwood University’s softball program will be leading Fuqua School’s varsity softball and girls basketball programs, along with Fuqua’s junior varsity (JV) girls volleyball team.

She takes the reins of a Fuqua softball program that was the Virginia Independent Schools Athletic Association Division III state runner-up in 2019 and the state champion in 2018.

“I would like to continue with their success and maybe build off of their success and bring in some of the college-level practices and kind of bring them up to the next level and hopefully just have a good season, if we do have a season,” Murphy said.

Though she is a relatively recent college graduate, finishing up her exercise science degree in 2016, she brings plenty of experience to the Fuqua softball coaching job.

A native of Arkansas, she stated she has been playing softball since she was 6.

“And then I transferred from slow pitch to fast pitch when I moved to Virginia when I was 9,” she said.

She was a four-year letterman for the varsity softball team in high school and then helped author a historic run at Longwood.

As her coaching biography stated at LongwoodLancers.com, Murphy, along with Carly Adams and Jamie Barbour, was part of the winningest class in the Longwood softball program’s history, accumulating 155 career victories while playing on the only three 40-win seasons in the history of the program.

Murphy was a four-year starter for the Lancers, the biography stated. She led them to two regular season Big South Conference titles, three Big South Tournament championships and three appearances in the NCAA Division I Tournament, where she helped them tally three wins by producing highlight-reel plays using her bat and glove.

“She’s one of 17 players in Big South history to earn all-conference honors in each of her four seasons, which includes first-team honors in her final three seasons in the blue and white,” Longwood officials stated.

After graduating, Murphy worked as an assistant coach with the Lancers in 2017. Her biography added that she was a softball assistant coach at Norfolk State University in 2018, helping the Spartans to their second Mid-Eastern Athletic Conference championship game berth in program history, along with their greatest win total since the 2013 season.

“Kayla would make the final decision, but we definitely put our heads together to be the head coach together,” Murphy said.

Murphy stated her playing experience is what will help her the most as Fuqua’s softball head coach.

“I think both coaching and playing is beneficial, but playing, I can connect with the players and kind of know what it takes to be that top-level player and how to get there,” she said.

Riley spoke to what it was like having Murphy on her staff.

“Emily has grown into an extraordinary employee,” Riley said. “She is independent, efficient, self-motivated and, most importantly, caring. Fuqua will be impressed with her knowledge of sport but, most of all, her ability to relate to student-athletes. I am excited to see her impact within our community. Emily is a wonderful person.”

As Fuqua’s varsity girls basketball head coach, Murphy brings more than a decade of playing experience, including four years on her high school’s varsity team, and she played some Amateur Athletic Union ball as well. She began playing basketball when she was 7 and played consistently through middle school and high school.

Murphy acknowledged she has no playing experience in volleyball, but she is doing research to help make up for that as she prepares to lead the JV squad.

“I know a lot of people, so I’m trying to get everybody’s ideas and just use my resources,” she said.

Late Monday afternoon, Aug. 10, Fuqua Athletics Director Mike Edwards announced the school will not be participating in any interscholastic fall sports due to the pandemic, meaning Murphy will have even more time to prepare for leading the young Lady Falcons on the volleyball court.