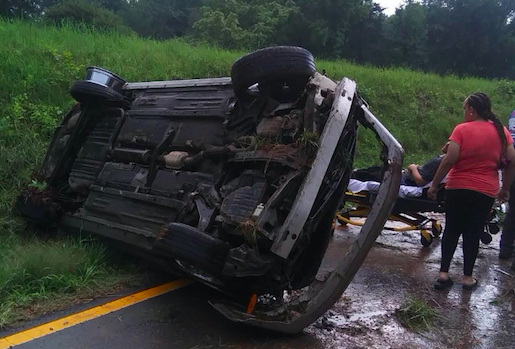 A 2000 Nissan Maxima ran through a pool of standing water Sunday afternoon, Aug. 9, on U.S. Route 360, causing the vehicle to hydroplane, cross the centerline, run off the road, strike a ditch and overturn.

Virginia State Police (VSP) are investigating a Sunday afternoon, Aug. 9, single-vehicle crash in Prince Edward County in which two people were treated for minor injuries after the car they were riding in overturned.

The VSP press release said that at 2:52 p.m. on Sunday, Virginia State Police responded to a crash on U.S. Route 360, East Patrick Henry Highway, just east of the intersection with Route 704, Love Road.

“A 2000 Nissan Maxima was traveling east on (U.S.) Route 360 when it ran through a pool of standing water causing the Nissan to hydroplane,” VSP Public Relations Coordinator Shelby Crouch said. “The Nissan then crossed the centerline, ran off the road, struck a ditch and overturned.”

The VSP release concluded by noting the crash remains under investigation.

Southside Virginia Community College (SVCC) will resume classes for its fall semester Aug. 24, but like most colleges and universities,... read more