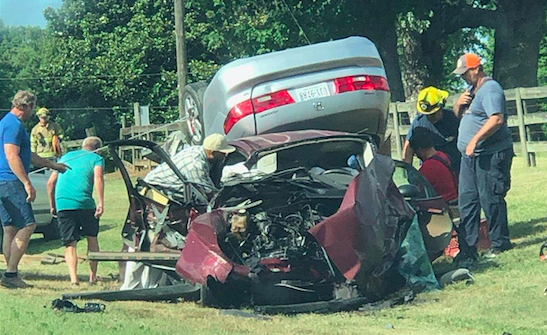 It was this fatal, two-car crash where an adult and a child were killed Saturday, July 11, on Route 15, just south of Route 715 in Buckingham County, that spurred county officials to request a road study from the Virginia Department of Transportation.

A road study on a section of Route 15 has been requested by the Buckingham County Board of Supervisors, sparked in part by a recent fatal car crash that took the lives of two people and injured several others.

At a monthly board meeting held Monday night, July 13, supervisors were notified of two phone calls made to the county office by citizens asking officials to request a road study. Residents expressed concern about a passing zone near the Jax gas station in Arvonia on Route 15 where the most recent accident occurred, stating a speed limit reduction may be necessary.

Board members echoed the concerns of the callers, and District 2 Supervisor Donnie Bryan ultimately made the call for a request to be submitted to the Virginia Department of Transportation (VDOT).

Resident VDOT Engineer Scott Frederick said Monday, July 20, the office had received the request from the board to perform a speed study in the area. He added such a study typically takes between 45 and 60 days to complete.

This article has been updated from its original version.