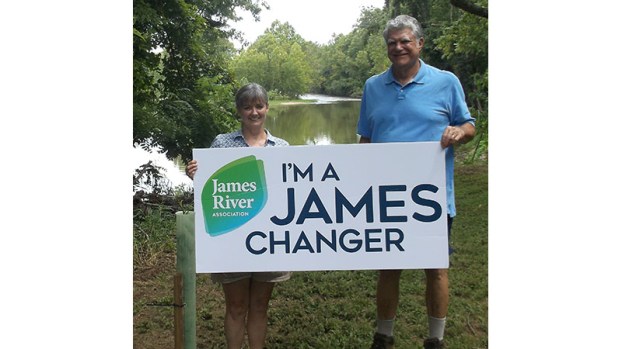 Pictured, Dave and Anne Brown stand next to their newly planted riparian buffer project next to the James River on their property in Buckingham County. Under the James River Buffer Program, 963 seedlings were planted along a little more than three acres of the Browns’ property. (Photo courtesy of the James River Association)

The James River Buffer Program is restoring and protecting the area’s creeks and riverside one seedling at a time, and area landowners can help by allowing a buffer to be established for free on their own property.

The program, launched in 2019 by the James River Association (JRA) in partnership with the Virginia Department of Forestry, focuses on assisting landowners in the Middle James Watershed with restoring streamside forests.

With funding through the Virginia Environmental Endowment grant, the program restores riparian buffer zones along the James by adding in native trees, shrubs and other plants.

Anne Marie Roberts, the Middle James restoration manager for JRA, said the association works with project participants to first evaluate how the land is being used and what trees would be best suited for the area. She then works up a buffer plan tailored to the landowner’s needs. Depending on the size of the project, once a plan is agreed upon, the buffers are installed with the help of volunteers or contractors, who prep the area, plant seedlings along the riverside and remove any invasive species. Replanting and maintenance are performed in the first three years as needed. The entire process costs nothing to landowners.

As the saplings age, a forest emerges, but the growth does more than just beautify the property. Riparian buffers serve many functions, including filtering out pollutants running off land and into the river, such as sediment or fertilizer. The trees also provide food and shelter for native wildlife, both in and out of the water. The buffers also help with stream erosion and decrease flooding in riverside areas.

Although the establishment of the buffers takes time, it is an investment for the future of both the property and the environment.

Dave and Anne Brown, of Charlottesville, own a 48-acre property at Sycamore Springs Creek in Buckingham. The couple noticed the portion of their land that abuts the James was losing a lot of mature trees over the years.

After Anne saw an advertisement for the program, the couple contacted Roberts, who helped them apply.

The Browns allowed Roberts to walk the property as she outlined her vision of what would work. After being approved, 963 seedlings were planted along a little over three acres of their land on the James River and Sycamore Springs Creek.

“It was super easy,” Dave said. He and Anne didn’t have to do a thing beyond giving Roberts an idea of what trees they would prefer to be planted.

Through a strong partnership with the Thomas Jefferson, Peter Francisco and Monacan Soil and Water Conservation Districts, JRA has installed 102 acres of riparian buffers since 2019, with 20 landowners, or “James changers,” participating in the program to date.

But more James changers are needed.

Those interested in participating in the project can go to jamesriverbuffers.org and type their address into an eligibility map to see if they are in the Middle James Region. Roberts added there is no minimum amount of land an owner must have in order to participate in the buffer program. Participants can range from the owner of a small residential lot to a large agricultural producer.

For more information on the program, residents can also email buffers@thejamesriver. org or call (434) 289- 7000.