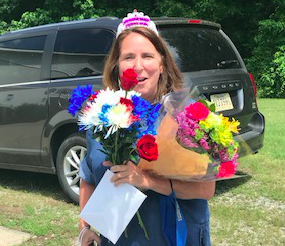 Dr. Amy Griffin was given a tiara and several bouquets as a part of the surprise parade arranged to congratulate her on her retirement.

Griffin’s years of service to both CuCPS students and the Cumberland community were celebrated with a surprise “congratulations and happy retirement parade” held at the Cartersville Rescue Squad as she worked her last food distribution day. Griffin was also honored by students, staff, community members and nationally recognized educational speakers in a special congratulatory video.

Griffin recently recalled some of her favorite memories accumulated over the past 17 years, including joining Jones in a hair dying celebration after students met their writing SOL goals. Griffin dyed her hair orange and blue for UVA and Jones donned Virginia Tech maroon and orange as a nod to their favored rival teams.

Griffin also recalled when fifth grade Cumberland student Desire’ Anderson won an essay contest allowing her to name a Maymont Park black bear. Anderson chose to name the bear “Midnight.” The entire fifth grade class got to attend the event in which the governor recognized Anderson at Maymont Park.

Griffin said she’s seen many changes during her time of involvement in the school system, the biggest of which include increased focus on the 5 C’s (critical thinking, creative thinking, communication, collaboration and citizenship skills) as well as career readiness, more access and opportunities in career and technical education and more student-led programs.

She highlighted that CuCPS has become known as a model and resource regionally, state-wide and nationally through being featured twice in Virginia Living magazine as a top school in the state, as well as being featured in documentaries highlighting the school’s successes.

Some of Griffin’s proudest CuCPS achievements include the development of the GO TEC Career Connections Lab at the Cumberland Middle School, Wagi Labs, Dukes Discover, the school’s support of families during the pandemic and CuCPS’ success in performance assessments on division, regional, statewide and national levels.

“It has been my privilege and honor to learn from Dr. Griffin during the past 16 years,” Jones said. “During our first meeting together as a team on July 1, 2004, she began by smiling and handing me a yellow legal pad sheet with my name on it and my responsibilities. I realized at that moment that student learning and education as a whole were priorities for her. Her love for students, work ethic, dedication, humbleness, values, encouraging people to step out of their comfort zones and her willingness to address issues are what I admire the most about Dr. Griffin.”

Jones said during Griffin’s 17 year journey at Cumberland, innovation became a top priority at the schools. Griffin was named Region 8 Superintendent of the Year, was recognized at the White House for being a digitally connected superintendent, earned her doctorate and saw all three schools become accredited at the same time.

Griffin added that her retirement from the school system has not yet personally sunk in yet, although she plans to still be active in education and the community in the future. She plans to remain involved with the Go Va Region 3 Council, the Call Me Mister program and the Commonwealth Learning Partnership. In the near future, she hopes to travel, volunteer at local schools and continue to advocate for small, rural schools.

“It has been an honor and privilege to serve the students, staff, families and community of Cumberland,” Griffin said. “It has truly been the highlight of my professional career and a labor of love. It has provided me so many amazing opportunities, especially the opportunity of seeing our children grow and develop from prekindergarten into adulthood. Cumberland County Public Schools is small but mighty, and has the biggest heart that I have ever seen. The school community will always be a part of my heart and soul.”