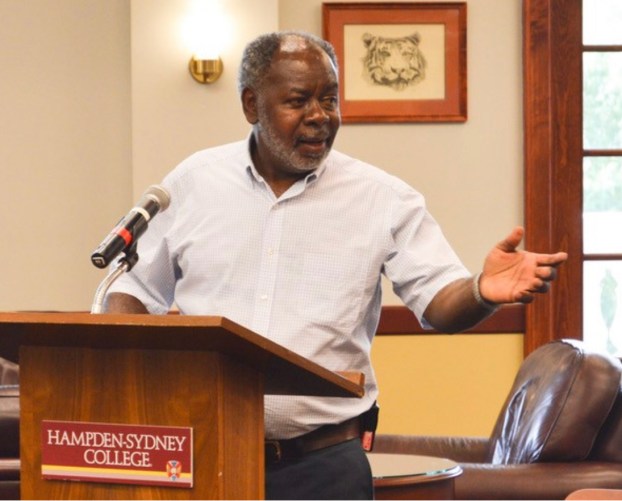 Ralph Crawley, flashing his trademark smile, loved the work he did for the Hampden-Sydney College community and he put his heart into it. Consequently, though he died unexpectedly June 21, his impact will endure.

The family of Ralph Crawley is grieving his unexpected passing this summer due to COVID-19.

For Crawley, who was 68 at the time of his death, “family” refers to his wife and children and extended relatives, but also to the Hampden-Sydney College (H-SC) community, where he worked in a variety of roles for nearly 50 years.

A college press release announcing his retirement from full-time work in 2018 highlighted the different jobs he held. His official title was the water/sewer supervisor, but his experience and work ethic made him the go-to person for a wide variety of projects during his tenure.

In addition to working in the Buildings and Grounds Department (B&G), he held many part-time jobs around campus, the release continued. These jobs included working in the dining hall, cleaning the church and serving on the Hampden-Sydney Volunteer Fire Department.

“He loved what he did, and I think because he put his heart into everything, that is why everyone loved him,” his eldest daughter, Vonita Crawley, said.

She noted he had been a full-time worker at H-SC for 47 years prior to his retirement.

“It would have been almost two years prior to his passing working part time,” she said. “But it’s one of those situations where most people retire and they just stop working. His passion for what he did and for what we considered — and have for a long time — as Hampden-Sydney being a second family to him as well as to us, that when you love something so deeply, it was hard for him to just walk away completely.”

Ralph Crawley was renowned for his work ethic that was manifested in his always being ready and available to help those in need.

“If you needed him, day, night, blizzard, rainstorm, hurricane, tornado, probably, if he could do it, he would,” Vonita said. “He took great pride in everything he did, even down from part-time work to his over 40 years as volunteer firefighter with the Hampden-Sydney Fire Department.”

H-SC Postmistress Shelby Asal said she knew Ralph for almost 40 years. For the vast majority of that time, they served together on the Hampden-Sydney Volunteer Fire Department, of which she is currently the president. He had held numerous positions in the department over the years, all the way up to chief.

“We did a lot of first responder calls together, we both did (Emergency Medical Services) EMS, and I never had to worry about anything going around besides my patient, because he was always there to make sure that I was taken care of and that nothing was going to happen,” Asal said.

The nature of working those calls was that they could come at any time.

“He was one of these people, that he was always there,” she said. “I don’t care what time of the night or the day that I would call him.”

She said he was never too busy to stop and help.

The H-SC press release noted Crawley had also served as the president of the Prince Edward Area Firefighters Association.

Jim Pohl, retired food service director at Hampden-Sydney, worked with Crawley for many years in the Commons, the release stated.

“When I first started, I asked a lot of questions,” Pohl said in the release. “‘Who works weekends?’ Ralph. ‘Who works nights?’ Ralph. ‘Who has the keys?’ Ralph. And Ralph was working part time. We meet millions of people in our lives, and you don’t come across people like him every day.”

Vonita said there were not many times she heard her father say “no” to people because if he was able to help them, from the smallest situation to the largest, he felt that was a big way he was able to give back to this community.

“I think he took great joy and great pride in getting up every day for those 47-plus years and going to the college and seeing the many, many faces,” she said. “Can you imagine how many students, professors, B&G employees, (Aramark) employees that he’s come into contact with? And a lot of them will tell you, even down to some of the local high school students there, they will tell you that my father working there was the person who allowed them to have their first job in high school, who developed a relationship, and they treated my father as if he was a father to them.”

Vonita said she feels the reason her father was the man that he was is due to his mother and his stepfather.

“They instilled in him a hard work ethic, I should say,” she said. “My father, as long as I can remember, that was the man he was.

“I spoke briefly at his funeral, and one of the things I said (was), ‘I know that I’m biased because that was my father, but when they made my dad, they broke the mold,’” she continued. “There is no other person or man that could walk in his shoes.”

She noted her father was always respectful.

“He always had this smile on his face,” she said. “He was a quiet man. I will say he didn’t speak a lot, or many words, I should say.”

But when he did speak, his words had great impact.

“I think that people stopped and listened because he was a man of a lot of knowledge,” Vonita said. “Again, I know I say this because he is my father, and so I sound biased, but I think that if you talk to other people in the community at Hampden-Sydney, whether it’s the fire department, whether it’s B&G, just some of the professors, coaches, you will get that same response from everyone that Ralph was, to me, Mr. Hampden-Sydney.”

“By all accounts, Ralph Crawley was selfless, kind, hardworking and an incredible example for our students to look up to,” he said. “He was truly the embodiment of our college’s mission of forming good men and good citizens. As a community, we were fortunate to benefit from Ralph’s generous spirit for 47 years. And, more importantly, many of us were blessed to be able to call him a friend. Ralph Crawley’s legacy will undoubtedly live on at Hampden-Sydney College, and our entire community sends our thoughts and prayers to Ralph’s family and loved ones.”

“It’s, of course, still very emotional for us at this point with his sudden passing, of course, and it being very much unexpected,” Vonita said.

He leaves behind two daughters, Vonita and Amecia, his wife, Brenda, and four grandchildren.

Ralph had both of his kidneys removed in July 2012 after they had become enlarged due to polycystic kidney disease, a disorder passed down through families.

He was able to receive a kidney transplant and was helped through that process, financially, by the community.

However, because of the transplant, he had to take medication to keep his body from rejecting the kidney.

“As a result of taking that medication, it also completely wipes out or suppresses the immune system,” Vonita said. “So with the virus and with him not having an immune system, of course, he didn’t have that ability for his body to try to fight off the infection.”

Though he is gone, his impact endures in many ways.

Vonita recalled some of the life lessons he successfully conveyed to her.

“To work hard,” she said. “Do what you love to do, and when you do it, give it your all, put your heart into it and give it your all. Those are a few things that, even though he would say it, you didn’t have to say it. You just watched, and you would mimic, basically, what he did, growing up.”

Pools closed, jump in a lake

The Town of Farmville and Fuqua School pools may be closed this summer, but notable swimming opportunities still exist at... read more