Uschi goes on a trail walk at High Bridge

Hello, fellow wildflower lovers. It’s me Uschi. Several months ago, I went with my mom on a trail walk, met a woman named Uschi, and apparently scared her half to death. You see, I’m what my mom calls an overly enthusiastic, shrieky greeter. The poor woman seemed to think I was going to eat her. The result was I was banned from future trail walks.

Last week, however, my mom relented and took me with her for a walk on the High Bridge Trail. She thought the section near Burkeville would be deserted. It wasn’t, and I gave everyone my usual enthusiastic greeting. I just couldn’t help myself.

To make amends, I thought I would tell you about some of the plants we found. There were lots of native wild strawberries (Fragaria virginiana) in bloom. Did you know that this plant is one of two used to hybridize the modern cultivated strawberry? It provided an outstanding flavor, while the other plant provided size.

Not long after that, we found some common blue violets (Viola sororia), including both the solid bluish purple ones and the blue and white variant known as the Confederate violet. Both flowers are tasty additions to salads and can be used to make a violet syrup that’s good added to soda water or white wine. Some people think that common blue violets are a nuisance, but they provide an early source of nectar of pollinators and are the larval host of the great spangled fritillary.

I barked a bit at passing cyclists and then we found a large patch of Parlin’s pussytoes (Antennaria parlinii ssp. parlinii). There are eight species of this plant in Virginia, and they can be difficult to tell apart. These are the most common species in our area and are distinguished by their leaves, which have three veins, are bright green and glabrous on top, and glabrous on the bottom. All pussytoes have those soft fuzzy flowerheads that look just like a little kitten’s toes and beg to be touched. My mom says that this plant is a nice filler in dry areas of the garden. I think it looks weedy.

Next to the pussy toes, we found a mystery plant that had deeply cut basal leaves and a spike of small yellow dandelion-like flowers. My mom couldn’t figure out what it was, and her Seek app only identified it as a dicot. Not good enough. So, she contacted her friend, the expert who has forgotten more about plants than my mom ever knew, and he immediately identified our mystery plant as oriental false hawksbeard (Youngia japonica), a plant that originated in eastern Asia and has now spread around the world. He said it’s probably been underreported in the digital atlas of the Virginia flora.

My mom and I also checked out the part of the High Bridge Trail that goes under the bridge. It’s an entirely different ecosystem. As you get closer and closer to the river, there are large patches of wild ginger (Asarum canadense) with its bright green leaves and small brown flowers with fuzzy stems; common bluets or Quaker ladies (Houstonia caerulea); more violets; lots of mayapples (Podophyllum peltatum); and even some wild chervil (Chaerophyllum procumbens). The mayapples look remarkedly like little umbrellas. Did you know that a large colony can be more than 100 years old?

I hope you’ll check out the trail. It’s not too crowded and there’s lots to see and, if you’re me, to bark at too. If you happen to run into me, please don’t be frightened. I’m everyone’s friend, but I’m often overly enthusiastic and perhaps a little goofy too. Your friend, Uschi. 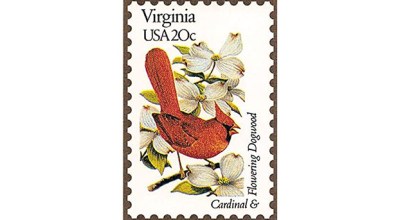 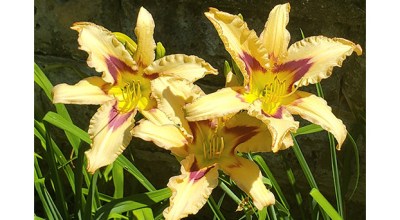