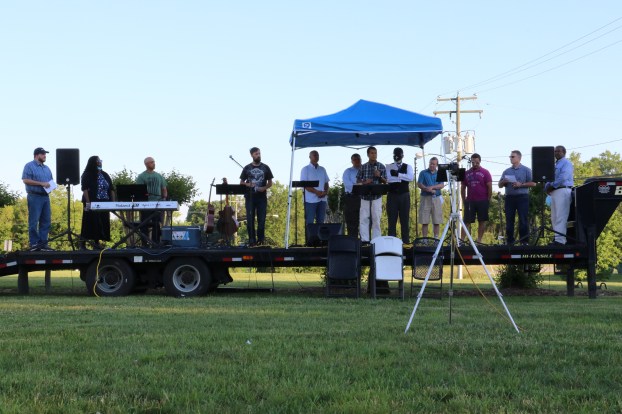 Praying for peace and unity in America

Leaders and members from multiple area churches gathered on the front lawn of Calvary Chapel Farmville on Industrial Park Road Sunday, June 7, for Community Prayer and Worship Night. The event addressed the protests throughout the nation in the wake of George Floyd’s death while in the custody of four Minneapolis police officers May 25. A multi-church music team led those in attendance Sunday in worship. Then leaders from at least nine different churches and organizations led everyone in prayer, praying for peace among men, for Christ-like love to abound, for grace and respect towards neighbors and for repentant hearts and surrendered lives to Jesus Christ, resulting in unity and revival. Prayer leaders pictured are, from left, Brian Norton, Kimberly Ashton, Whitsel Jackson, Anthony Wooten, Marv Fisher, Scott Curtis, Nanda Giri, James Taylor, David Atkinson, Durrell Weaver, Bill McIntosh and James Ashton. The Gideons provided water bottles and ice for those in attendance and Matt Sorensen and Kevin Warren served as ushers as people arrived in their cars.

Restaurants were allowed to reopen their dining rooms to customers this past Friday, June 5, for the first time in... read more