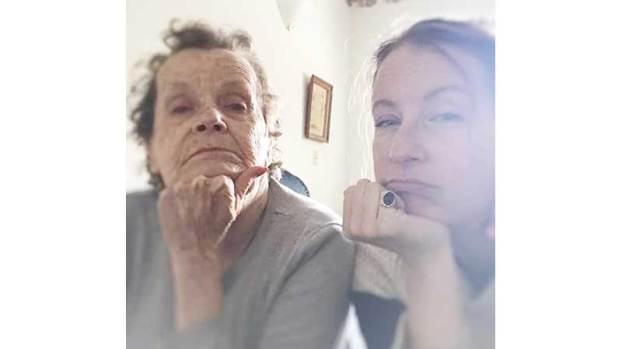 Juanita Giles lost her mother, Mary Selleck Morton Giles, due to COVID-19 Sunday, June 21. Mary was known for her caring nature and marching to the beat of her own drum. Pictured, from left, are Mary and Juanita.

Losing a loved one to COVID-19

Juanita Giles felt robbed when her mother died of COVID-19 Sunday, June 21. Now she’s asking others to be aware of the reality of the virus.

Juanita is the director of the Virginia Children’s Book Festival and lives in Charlotte County with her husband and children. During her heyday, Juanita’s mother, Mary Selleck Morton Giles, was a devoted mom and passionate school bus driver who marched to the beat of her own drum.

In the last four years, she had been at the Hickory Hill Retirement Community in Burkeville. She was a memory care patient struggling with the effects of dementia.

When the pandemic hit and nursing homes across the country began to experience serious virus outbreaks, Juanita felt immensely concerned about her mother’s vulnerability. She said when the facility had its first case of the coronavirus, a positive staff member, no phone calls were made to family members.

“They attached it to a letter that they put in with the bill and then would not answer the phone or respond to emails in a timely fashion, and ultimately were being quite dismissive of concerns,” she recalled.

Juanita said she, in time, learned of an eventual large outbreak at Hickory Hill. Mary turned 76 Sunday, May 31. By the following Wednesday, she was hospitalized at Centra Southside Community Hospital in Farmville with a fever and pneumonia. On Saturday, her coronavirus test came back positive.

Juanita said one of her mother’s doctors told her he had observed that COVID-19 seemed to accelerate dementia exponentially. Mary’s health quickly declined. She would not eat or drink, and Juanita was warned that things were not looking good.

Mary had an advanced directive and had made end-of-life care requests including not being put on a ventilator or a feeding tube. She was transported back to Hickory Hill, and Hospice of Virginia became involved in her care. Juanita emphasized that all health care workers at the hospital, the assisted living facility and hospice were incredibly helpful and kind during the experience.

At first, Juanita wasn’t able to see her mother after her return to the facility, and although her mother’s condition fluctuated for a week, Mary soon went into a coma. Juanita eventually received a call from hospice informing her that her mother’s departure was imminent.

Wearing full personal protective equipment and only being able to hold hands through gloves, Juanita stayed with her mother in an isolated room from 9 a.m. Saturday until Mary passed at 2:30 a.m. Sunday, June 21.

“It was a brutal way to die,” Juanita said.

Juanita did not self-quarantine after her mother’s passing, as Mary was at the end of the typical quarantine period for coronavirus patients. All nurses at Hickory Hill have been wearing PPE and all patients were in their own isolated rooms, she said. She has since been regularly monitoring her temperature and has not had any symptoms.

She said while fear of contracting the virus was constantly on her mind, concern about her own health meant nothing in comparison to the importance of being with her mother in those final hours.

Juanita has friends who also lost loved ones from COVID-19. She said while she has always been aware of the virus’ dangers and conscious about the importance of mitigation efforts, her mother’s passing further solidified the reality of COVID-19’s prevalence in the community.

After Mary’s death, Juanita felt robbed. She said her mother was the seventh person in one unit at Hickory Hill to die from the virus in just one week, and it felt so cruel for those in the throes of dementia, cancer or other health issues to succumb to the coronavirus when already facing the terrors of another disease.

“It’s just not fair for something like this to come and get you. You have enough horror in your life already.”

In the midst of the grieving process, the loss of her mother sparked an anger of sorts towards those with a cavalier attitude toward the virus who do not take health precautions and therefore put others at risk.

“It’s easy to think, just like everything, that it’s something that happens to somebody else, and it’s not. And to think that my mother would be lumped into an expendable group makes me furious.”

Juanita described herself and her husband as pragmatic people who are open with their three children about the world. She said while the kids understood as best they could the seriousness of the pandemic, the realization that their grandmother had contracted the virus was terrifying.

Mary’s passing meant the children were having to learn and understand the concept of death in the midst of trying to understand a global health crisis.

“They didn’t understand why they couldn’t go see her,” she said.

Juanita expressed her hope that if a lesson was derived from her mother’s death, it was the importance of taking others’ lives into consideration in regards to health risks.

“One thing my mother really, really hated was selfishness,” she added. “Every moment of your life is a moment where you can choose how you are going to be selfish or not selfish … It pains me to see that people choose to die on this hill of selfishness. This is not the hill you want to die on.”

Mary’s obituary ran in the Wednesday, June 24, edition of The Herald. While the obituary mentioned her death at the hands of COVID-19, the unfortunate circumstances surrounding her passing were overshadowed by a long, long list compiled of memories from friends and family about what a wonderful person the world had lost. A woman who could crochet, but not knit. A woman who kept a cooler on the school bus to give popsicles to students. A woman who wanted to be a mother more than anything.