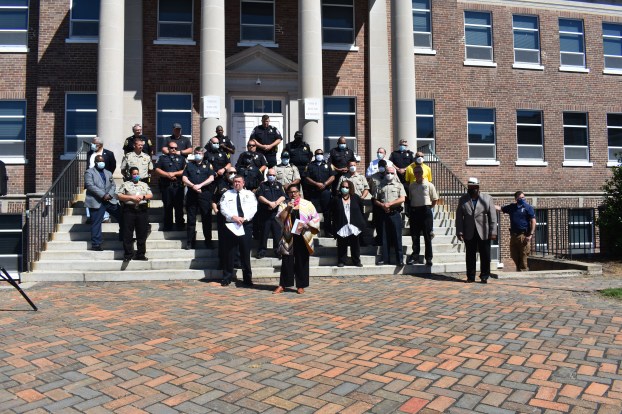 Area law enforcement officials gathered on the courthouse steps Monday afternoon to read a statement expressing outage at the death of George Floyd in Minneapolis. (Photo by Alexa Massey)

EDITORIAL — A new day has come in Farmville

It was encouraging to see area law enforcement officials standing on the Prince Edward County Courthouse steps Monday, June 1, declaring their shock and expressing outrage at the murder of George Floyd during a Monday, May 25, police encounter in Minneapolis.

The words from the group and the emotion from Prince Edward Commonwealth’s Attorney Megan Clark, as she proclaimed that this violence against black Americans by law enforcement officials has to stop, were much different than the scene on those same steps almost 57 years earlier.

On Sunday, July 28, 1963, instead of Farmville’s police chief standing up and talking about carrying out his duties with respect and integrity for all individuals, the then-chief of police manhandled and dragged young black demonstrators from the steps of Farmville Baptist Church, across the courthouse lawn, and up those same courthouse steps. The crime of the young black people: attempting to attend worship services in Farmville’s white churches.

“I remember, I got dragged on my back,” Tina Harris vividly recalled of that morning when, as a 13-year-old African American girl, she accessorized her finest beige-and-blue dress with a hat and gloves. Her story is from a publication of the Moton Museum and Longwood University students called, “All Eyes on Prince Edward County.” The story was written by Amanda Holmes.

Farmville was on the wrong side of history during the Civil Rights era. It is still known as the place that closed its public schools for five years to keep from desegregating them. Our Moton Museum painstakingly chronicles the sad tale of the county’s failures during that chapter of history.

This newspaper was also on the wrong side of history back then, along with town and county leaders, promoting the policies of Massive Resistance and segregation.

Fortunately for all of us, a new day has come. A day when law enforcement officials speak strongly against the inherent racism in our society and this newspaper works to fairly represent every segment of Farmville’s community.

Those courthouse steps where the officials stood Monday have seen much progress.

The people who stood there Monday were a diverse group of men and women appalled at what they had seen in other areas of our nation, while ironically standing in the same place where similar events happened only a few decades before.

Their words are evidence that we have changed. Those people speaking to us Monday were not the same as those who dragged black demonstrators into the courthouse for attempting to attend a worship service.

Change has come to Farmville and many other places in America, but there is still so much more change that needs to come.

More change is needed. But law enforcement officials standing  on the courthouse steps in Farmville, in solidarity with their African American neighbors, is a living testament that change can happen, progress can be made and we can heal our nation together.

(The views in this editorial are of The Farmville Herald editorial staff. This editorial was written by Editor Roger Watson. He can be reached at Editor@FarmvilleHerald.com or (434) 808-0622.) 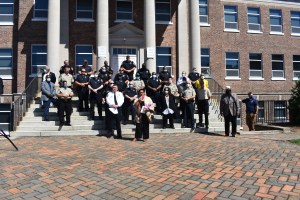 Area law enforcement officials gathered on the courthouse steps Monday afternoon to read a statement expressing outage at the death of George Floyd in Minneapolis. (Photo by Alexa Massey)

As the months go by and the country remains under the grip of a global pandemic, it becomes clear that... read more