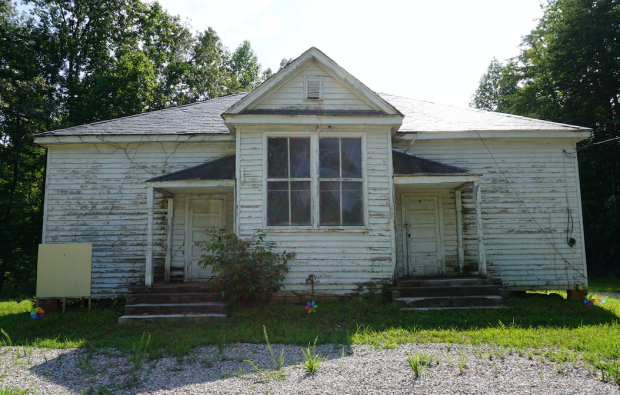 The Pine Grove School in Cumberland County was recently named one of Virginia’s seven most endangered historic places by Preservation Virginia. (Photo courtesy of The Virginia Department of Historic Resources)

Preservation Virginia, a privately-funded, statewide historic preservation leader founded more than 100 years ago, recently named the Pine Grove School in Cumberland County one of its seven most endangered historic places of 2020.

For nearly 20 years, Preservation Virginia has put together an annual Virginia’s Most Endangered Historic Places list to raise awareness of the commonwealth’s historic sites, many of which are “vulnerable to neglect and deterioration due to insufficient funds, inappropriate development and/or insensitive public policy.”

The list aims to encourage citizens, localities and organizations to continue to advocate for the protection and preservation of such places.

Pine Grove School is one of the few remaining Rosenwald Schools originally established in rural communities throughout the South in order to educate African American children. In December of last year, Pine Grove Elementary School of Cumberland was among 16 historic sites declared a state landmark by the Virginia Landmarks Register.

Concern regarding the preservation of Pine Grove has been an especially hot topic over the last year in relation to the proposed Green Ridge Recycling and Disposal Facility to be built adjacent to the school. That controversy was echoed by Preservation Virginia when the school was announced on the list of endangered historic places.

“The Pine Grove School Community, a rural community of businesses, churches, cemeteries and homes of students and teachers who attended the Pine Grove Rosenwald School in Cumberland County, is under threat from a proposed 1,200-acre landfill that, if approved, will fundamentally change the historic character of this 100-year old community and put residents at risk from major environmental hazards,” wrote Preservation Virginia officials in the 2020 list. “The threat to the Pine Grove School community is symbolic of the continual and systematic failure to adequately protect Virginia’s historic African American historic sites.”

“The efforts of the AMMD’s Pine Grove Project have been rewarded many times over by attracting family, alumni, community, scholars, legislators, environmental justice organizations and historical and cultural institutions,” officials noted in the release. “It has become a beehive of inspired, willing workers.

“The Mission of AMMD Pine Grove Project is to work cooperatively with a broad coalition of individuals and organizations ‘to protect, restore, and repurpose the historic Pine Grove Elementary School as an African American museum and cultural center to showcase the contributions of the community that built and sustained it.’”

“The COVID-19 pandemic has heightened our awareness of how essential our historic legacy is to our economy and our communities,” Northam said Thursday, “and that rehabilitation of historic buildings will leverage private investment in our communities by helping put Virginians back to work.”