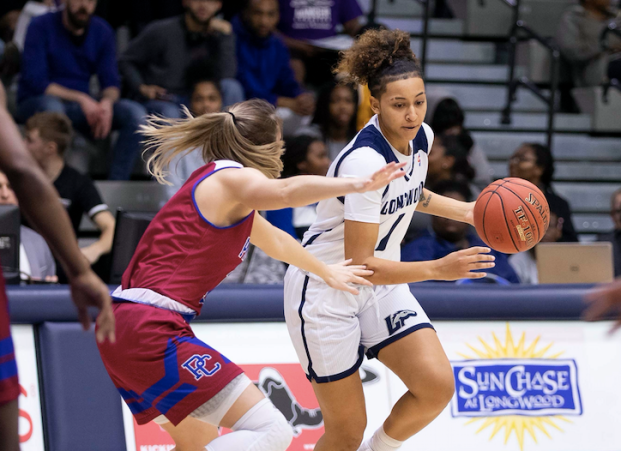 Long after the last basket of the 2019-20 season for Longwood, freshman guard Kyla McMakin continues to accumulate awards and recognitions after her historic freshman season.

HerHoopStats.com announced its list of Fab 15 Freshman Thursday, April 23 with McMakin earning a spot on the list of top freshmen across the nation.

The freshman guard finished the season as the leading scorer in the Big South Conference, averaging 18.8 points per game and becoming only the fourth freshman in conference history to eclipse the 500-point mark while breaking Longwood’s single-season freshman scoring record and the fourth-most points scored in a single season by a Lancer in program history with 565.

The Virginia Beach native also recorded Longwood’s Division I-era record for points in a single game with 36 against Presbyterian, while recording three double-doubles and averaging 5.2 rebounds and two steals per game.

McMakin is the first Lancer to be honored with a selection on the list of Fab 15 Freshman from HerHoopStats.com with the Lancer standout selected among some of the best rising talent in women’s basketball joining Aliyah Boston from South Carolina, Alissa Pili from USC, and Maddy Siegrist from Villanova.

Longwood returns all but two Lancers from its historic 2019-20 season in which several Lancers found themselves atop several of the program’s all-time leaderboards. McMakin leads fellow freshman standout Anne-Hamilton LeRoy, Big South blocks leader Akila Smith, and Big South assists leader Tra’Dayja Smith as Longwood continues to build one of the top programs in the Big South Conference.

Build with us: The story of the 2019-20 women’s basketball Lancers