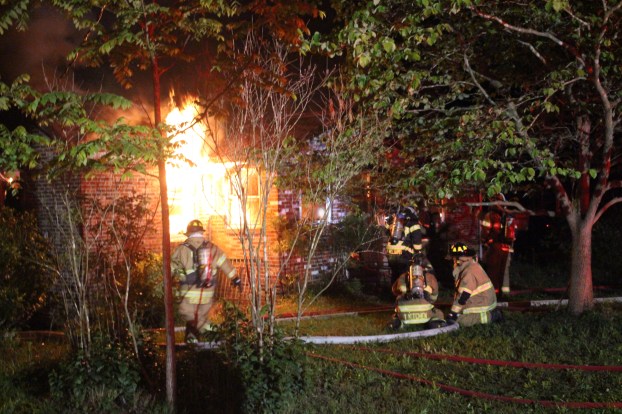 Crews work to extinguish a fire in the 100 block of Cooks Road Friday night, May 22. The incident resulted in one fatality. (photo by Dan Pempel)

A Cumberland County man died Friday, May 22, after a fire broke out in his home.

Randolph District Volunteer Fire Department (RDVFD) responded just before midnight Friday, May 22, to a reported house fire in the 100 block of Cooks Road in Cumberland County.

RDVFD Fire Chief Paul Adkins said crews were on the scene within eight minutes of the call. Firefighters arrived to find a single story home with fire showing through the roof.

Adkins said the victim was deceased when discovered by crews that night.

He added approximately 10,000 gallons of water were used to fight the fire, and crews remained on scene for approximately five hours.

One person injured in crash in Meherrin

A single-vehicle crash occurred Wednesday morning, May 20, in Meherrin, drawing multiple agencies in response. “A Nissan ran off the... read more