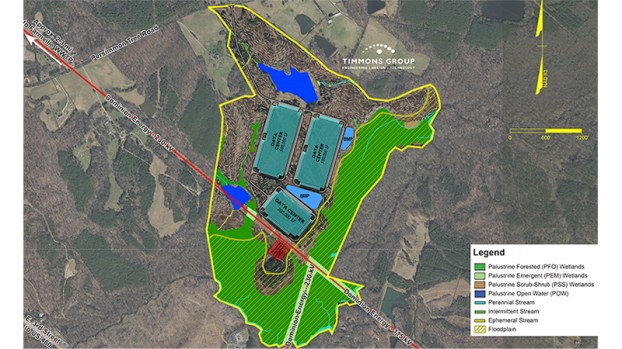 This plot map supplied by the county shows how a proposed data center would work on the 280 acres of land.

Officials stated in the release that data centers have the potential to generate high tax revenues and high-paying jobs, along with many other positive indirect impacts on the local economy.

The money was allocated to purchase 280 acres of land just off of Persimmon Tree Fork Road, where two major Dominion Energy transmission lines merge and there is access to both Mid-Atlantic Broadband Communities Corporation (MBC) fiber and water from the Town of Farmville, the release highlighted. There is sufficient land to construct multiple structures totaling 1.3 million square feet of usable space.

Out of the $1.9 million total allocated by the Board of Supervisors to the IDA, the additional money is being used in part to offset the costs for due diligence studies already performed and the remainder is earmarked to fund efforts to help advance to a Tier 4 State Certified Site status and market the property, the release stated. The county plans to proactively market the site with the help of Dominion, MBC and the Virginia Economic Development Partnership.

Officials noted in the release that data centers are increasingly expanding throughout the Commonwealth of Virginia, moving from Northern Virginia, which is home to one of the largest data center markets in the world —Loudon County — to other parts of the state in search of more land and lower land prices.

“There is a site in Prince Edward County that could make a direct impact on the community, like the Microsoft site did in nearby Boydton,” officials said of the purchased site.

Employment at data centers is typically capped at around 30 employees.

Both MBC and Dominion Energy, major players in the data center industry, helped vet the site, and strongly support the development of it, the release noted.

“Data centers have become critical infrastructure to the operation of our daily lives as a society, especially during this COVID-19 pandemic, where data center activity is at an all-time high,” officials said in the release. “For anyone who uses an iPhone or smartphone, streaming services such as Hulu or Netflix, or spends any time on Facebook or LinkedIn, they are utilizing the cloud services of a data center provider.” 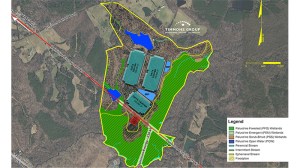 This plot map supplied by the county shows how a proposed data center would work on the 280 acres of land.

William Taylor Hale Mottley, 28, of Cumberland, was arrested in the early hours of Tuesday morning, May 12, for the... read more