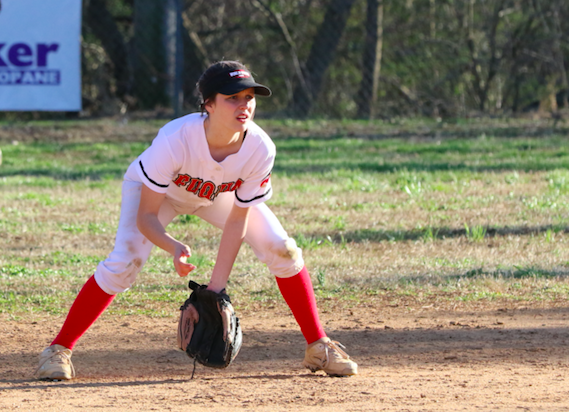 Pictured here playing second base for Fuqua School in 2019, Madelyn Bickford also played at second base this spring as a Mary Baldwin University freshman before moving to the outfield.

Catching Up With… Madelyn Bickford

Madelyn Bickford, of Buckingham, began leaving her imprint on the collegiate softball world as a freshman during the 2019-20 school year at Mary Baldwin University (MBU) in Staunton.

She had already made her impact in Farmville, earning state championships in high school and in Dixie Softball as a member of Fuqua School’s varsity squad and Prince Edward-Farmville Youth Association’s Debs All-Star squad, respectively.

Last fall and this spring, she was part of a turning of the tide for the Mary Baldwin Fighting Squirrels.

Bickford said Mary Baldwin Head Coach Christy Shelton made a comment that the squad did not really play as a team during the 2019 season.

“But throughout practices during the fall and then in the spring when we started playing games, she said she noticed a big difference from last year to this year in how we really started to mesh as a team,” Bickford said. “And we were really turning the program around and we were improving our stats and our wins and all that by a lot this year. And then we were on our way back from Ferrum and got the news that we were done.”

The Fighting Squirrels (3-9) had just finished a doubleheader against Ferrum College March 11 when the COVID-19 pandemic interrupted and ultimately ended their 2020 season. Twenty-eight games remained on Mary Baldwin’s regular-season schedule.

“We were on the way to Ferrum when we started hearing about all the schools closing, and I got a text from my mom saying that (James Madison University) and (University of Virginia) were waiting to make their decisions,” Bickford said. “And those being the two biggest schools that are really close to us, I figured once they closed that it wouldn’t be soon after that we would close.”

She said the entire team was together on the bus when Shelton delivered the news that its season had been suspended.

“It was really sad, especially for the two seniors we have on the team,” Bickford said, recalling the moment. “Nobody said anything. It was quiet.”

Then some of the older members of the team started playing some music, helping lighten the mood, she noted.

“We just kind of sang and spent time with each other, because we knew that was going to be one of the last times we were together with our seniors,” she said.

Bickford noted that personally, she was really sad about the season being cut short because she did not end up getting to spend much time with those two senior captains, Sam Breeden and Jordan Miller, with whom she had started to bond.

“I was really upset just because it’s my freshman year, and it got cut short, but I felt more sad for the seniors, because even though the NCAA is giving them a year of eligibility back, with grad school and stuff, they don’t think they’re going to be able to do it,” Bickford said.

She confirmed that everyone on the team was redshirted, meaning they will still be eligible to play four full collegiate seasons after this year.

Bickford said she played at least a little bit in all 12 of Mary Baldwin’s games this season, logging time at second base and in the outfield. She started at second in the team’s season opener against Covenant College.

“I feel like I contributed a lot to the team as a freshman and with being able to play multiple positions and also being a lefty batter,” she said. “I can bunt or I can hit, and so I just felt like I brought a lot of ability to the team to help them out.”

Shelton spoke highly of Bickford, noting that, like all freshmen, she had to make a lot of quick adjustments to college life, as well as college softball.

“Madelyn is very coachable and open-minded to embrace new challenges that are put before her as she competes for playing time,” the coach said. “Madelyn played second base for us during fall and at the beginning of our spring season. We moved her to outfield because of her speed.”

Shelton said she and her staff look for Bickford to keep improving next season, whether it is at second or in the outfield.

“Offensively, she is learning the college pitching but is a tough out as she will battle in the batter’s box to get on base,” the coach said. “This year has helped Madelyn get stronger and (gain) more confidence in herself, and that will help her going into next season.”

The coach added that Bickford is fun to be around, and the staff enjoys having her on the team.

“We are excited to see how she develops in the next few years,” Shelton said. “Madelyn exemplifies what a MBU softball player is all about: passion, hard work, respect and commitment.”

Reflecting on the 2020 season, Bickford said her best individual performance came March 8 in a game against Franklin & Marshall College.

“I came into the game and laid down a really good bunt and also had a couple good plays in the outfield,” she said.

She already has preliminary goals for next season.

“Well, I would say, ‘Get through the whole season,” she said with a laugh.

Bickford also noted wanting to improve her skills as an outfielder. Before this spring, outfielder was a position she had not played since her freshman year of high school.

“It took a little bit of re-teaching myself some stuff, but I’d really like to improve in the outfield so I can be a bigger help to the team,” she said.

Town and Gown – An incredible feeling

The day I learned I was moving to Farmville was the day I literally wished out loud for it to... read more