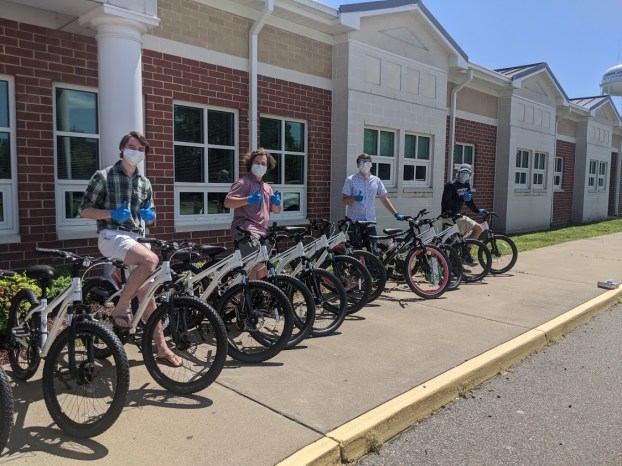 Twenty-two students from Cumberland Middle School were rewarded for hard work and good behavior after they each won a free bicycle from the Hampden-Sydney College (H-SC) Cycling Club’s “Taking Flight” project.

H-SC student Andrew Howell, 22, one of the founders of the Cycling Club, said he felt inspired to create the project after reflecting on his own difficulties during middle and high school. Howell sometimes found himself lagging behind in his classes. After reflecting on his struggles at school, Howell and his fellow club members wanted to find a way to help motivate area students to develop good academic habits early on.

The club decided two years ago to partner with Prince Edward Middle School for the first ever Taking Flight project. Students involved in the project were given the opportunity to earn raffle tickets after turning in homework, doing well on tests and exercising good behavior in class.

At the end of the year, members of the Cycling Club came to Prince Edward and drew several names at random from the ticket jars. Each student whose name was chosen won a free bike courtesy of the club.

The program was so successful that Howell and his friends decided this year to offer students at Cumberland Middle School a chance to win a free bike.

Howell said although the school year ended abruptly due to the COVID-19 pandemic, the Cycling Club was determined to give those students a reward for their hard work.

So, Howell and several other club members ventured to the middle school Monday, May 4, to hold the bike raffle virtually. Students were able to watch by video as 22 winning tickets were selected. Those winners will be able to come to the school to pick up their bikes when possible, along with helmets, water bottles and other accessories.

Howell said the club uses its entire fall semester budget to purchase the bikes and equipment. The group also partners with the Omicron Delta Kappa (ODK) leadership honor society at H-SC, which usually matches the club’s donations and encourages other clubs to donate their unexpended funds. Between the two groups, the Cycling Club is usually able to raise $5,000-$6,000 by the end of the fall semester to go toward the project.

Howell expressed his joy in knowing that the project provides children with both a motivation to succeed academically and a way to get outside and stay active. He hopes the club will be able to hold the raffle at more schools in the future.

“It’s a great community effort and everyone benefits,” Howell said.