Red Door 104 Owner Audrey Sullivan has had to temporarily close the red doors to her art studio due to the COVID-19 pandemic, but she is hoping to keep her business alive during this time of quarantine by relying upon an ability she has honed for the last 30 years — furniture painting.

This is a lemon table painted on oak by Sullivan, and it is available for purchase.

She has a gallery of pieces available for purchase, but she is also available for hire if someone has something they want painted.

“I don’t just do furniture, but I also design rooms,” she said, “I do color consulting. I help people pick colors for their houses.”

Beneficiaries of Sullivan’s painting talents are known by many on an international level. She painted a piece of furniture for President Bill Clinton and First Lady Hillary Clinton when they were in the White House.

Since she could pick up a pencil, Sullivan has been an artist.

“I can never remember not being one,” she said. “So I think when I was 4, I thought I was one.” Her tools as a 4-year-old were crayons. “I would finish a coloring book in an afternoon,” she said. “Other kids just picked a few pictures they liked and colored them and moved on. No, I did the book.” 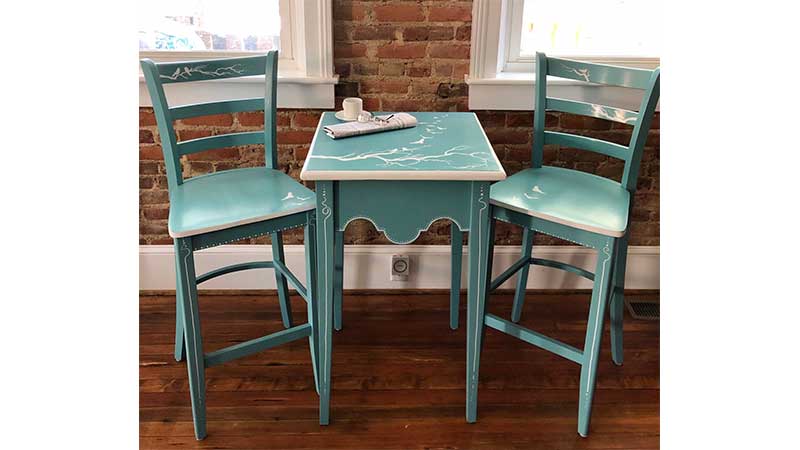 This set that Sullivan painted was purchased from the Fuqua auction from Green Front Furniture. It was done in a crackle finish and was the color of meat — but not anymore. It is available for purchase.

Later in life, she became an art teacher, which allowed her to dabble in basically every artistic medium imaginable.

“It doesn’t mean I excel at all of them, but I am curious,” she said. “I’m a curious artist, and I’m curious about new techniques that I see either in a book or online, and I’ll try anything once.”

Sullivan has been a staple of the artistic community in Farmville since buying the building for Red Door 104 in 2013.

She said she has a rule with her studio that if one of the instructors there teaches a workshop on something she has never done, like needle felting, she signs up for the class.

“I will know within five minutes, maybe 10, if it’s something I really want to pursue or if I never want to do this again,” she said. “But I always want to try.” 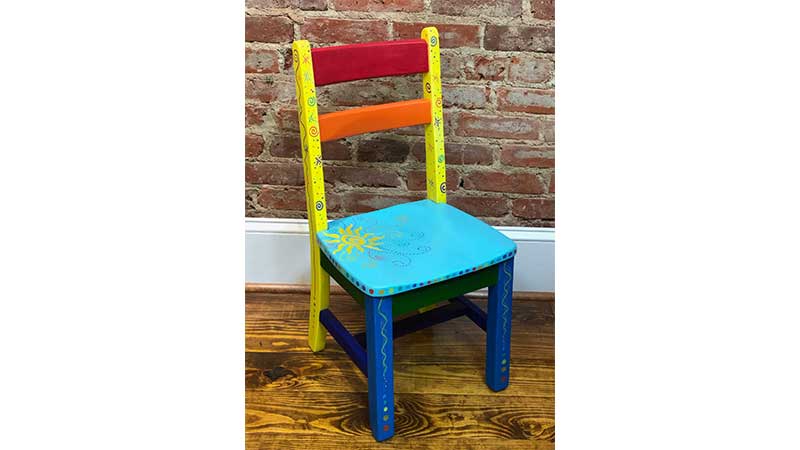 Audrey Sullivan will customize this child’s chair she painted by adding a child’s name on the back rung. The chair is available for purchase.

She does have a favorite medium, though.

“Acrylic paint, metal leaf, I mostly work with gold, silver, copper leaf — that’s pretty much my go-to medium,” she said. “So I paint all my furniture using acrylic paints and metal leaf.”

Sullivan got her start in furniture painting around the time her children reached high school.

“When my kids finally got to high school, I was told about a company in Annapolis that painted furniture, and I thought, ‘That’s kind of interesting,’” she said.

She called them up and asked if they were hiring.

“They said, ‘Come on in.’ And they were going to interview me. And I brought a portfolio with me of artwork that I had done,” she said.

They told her she was the only person who had ever come in with a portfolio. The company would typically hire high school graduates and teach them how to make faux finishes with rags and sponges. 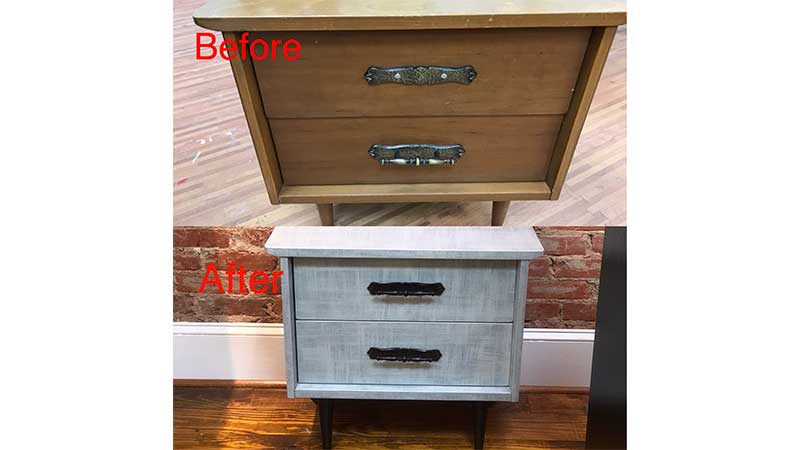 Dr. Mark French, of Ridge Animal Hospital in Farmville, had this piece in his bedroom as a child. He commissioned a makeover, and courtesy of Audrey Sullivan, it now has a beautiful linen finish with black accents.

“They only had one person who could actually paint things, pictures, on a piece of furniture, so I was hired on the spot, which was awesome,” Sullivan said, noting this began her career of painting good, high-end, antique reproduction furniture. “That was their specialty.”

It was while Sullivan worked for the Annapolis-based Niermann Weeks company in Maryland that the Clintons’ decorator, Kaki Hockersmith, commissioned the company to paint an end table for the Clintons as a Christmas gift from her.

She left Niermann Weeks after three years, but it was just the beginning of a long career. 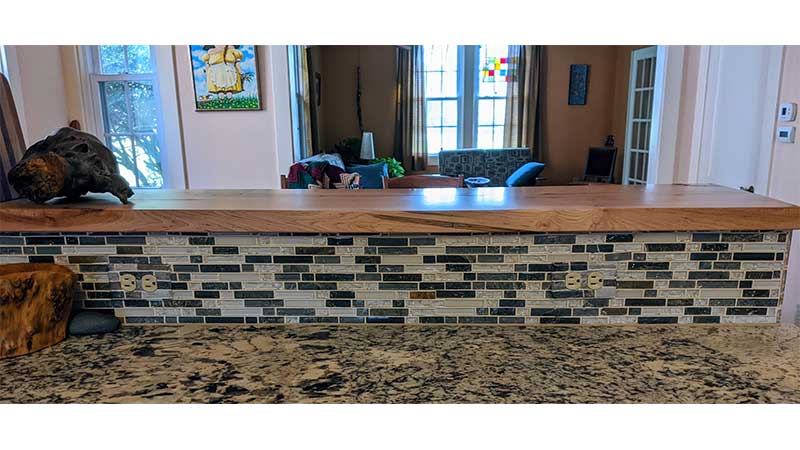 This is an example of Sullivan’s ability to make even light switch plates disappear, matching the tile of the wall around them.

“There was a designer showhouse happening in D.C., and I was invited to come and do a room in it, and from there on, I stayed busy,” she said. “I could work seven days a week.”

“For about 30 years, that’s what I did — I painted both walls and furniture,” she said. “They’re not much different. You use a lot of the same techniques.”

Sullivan noted it does not matter what surface she is painting on.

“I’ll paint on wood, fabric, metal, glass — there’s a primer for everything,” she said. “There’s something to make anything stick, and if it’s out there, I have figured it out.”

She has continued her work painting furniture and walls while running Red Door 104. 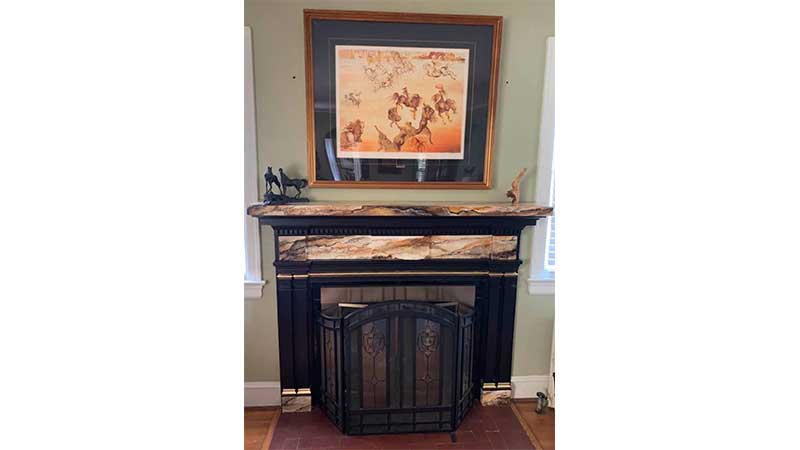 In addition to painted furniture, Audrey Sullivan offers in-home decorative painting. This fireplace belongs to Justine Young, executive director of Piedmont Senior Resources Area Agency on Aging Inc. in Farmville. “We added a heavy mantle, and I marbled and gold leafed accents to make this a real statement in her living room,” Sullivan said.

“We have 25 artists in our studio, in our gallery, and my contribution is painted furniture, so that’s what I do,” she said. “And I do a lot of custom pieces for customers. I’m painting this picture frame right now for Brad and Virginia Watson.”

Sullivan said she does commissioned pieces, but she does not paint new furniture.

“I do a lot of antique pieces, but they have to have good bones to them,” she said. “I don’t like cheap furniture. I don’t waste my time on disposable furniture, unless somebody’s paying for it.”

She likes good quality furniture, but she said she will not paint certain woods.

“I’m really funny about that, a lot of people are,” she said. “So if you have a beautiful mahogany dresser and ask me to paint it, I’m going to say, ‘No. Don’t paint the mahogany.’ But if you’ve got a piece that’s been beat up or it’s old or it’s just seen better days or it’s already been painted or needs patching or something, then I’ll paint it.”

Heroes of the Pandemic: ‘Be the calm in the storm’

Miller’s Country Store is a Farmville-based establishment at 2737 W. 3rd St. that people in the community count on for... read more