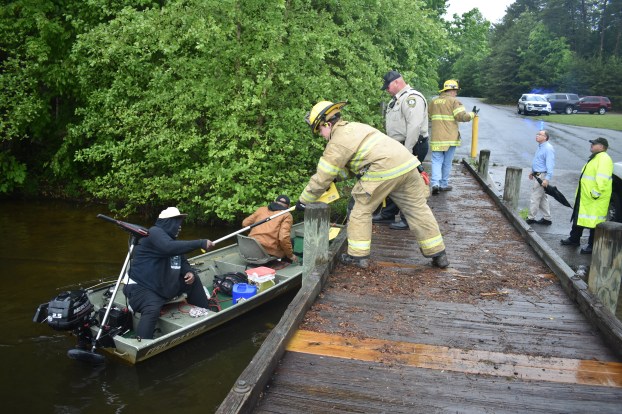 Emergency personnel responded to a report of a boat caught on a tree stump and taking on water on Briery Lake. Pictured, the callers return to shore after a Prince Edward County worker helped them dislodge the debris. (Photo by Alexa Massey)

Emergency personnel responded to a call for help from a boat taking on water on Briery Lake in Prince Edward County.

According to Prince Edward County Sheriff L.A. “Tony” Epps, the call came in at approximately 11:10 a.m. Tuesday, May 19 from an individual stating he and another man were in a boat on the lake that had begun filling with water. The caller stated both occupants of the boat could swim, but they were unsure if they could make it back to land safely.

Emergency personnel, with the help of Prince Edward County employee Billy Coe, arrived on the scene. Coe took his personal boat out to assist the two men. He found that the caller’s boat was caught on a stump in the lake and would not move. Coe managed to dislodge the boat and all parties returned to the boat ramp safely.

Bobby Banks, one of the callers in distress, said on scene Tuesday he and his companion, Timothy Harris, had been fishing when their boat became stuck.

“We went way out into the (lake),” Banks said. “We were going across the little trees sticking out of the water when a big stump got hung up under the boat.”

Banks said he and his companion, Timothy Harris, were stranded on the lake during the chilly, rainy morning for approximately half an hour, but added they did manage to catch some nice fish while they were out.

Virginia Gov. Ralph Northam is asking the federal government to implement additional screening and testing for the coronavirus at the... read more