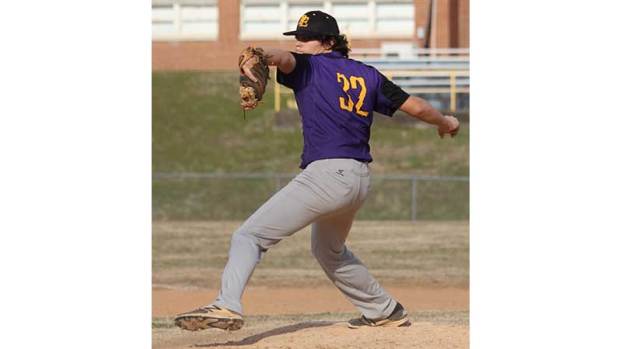 Wade Jenkins said his strongest contributions to the Prince Edward County High School varsity baseball team were his defense and, at times, his work on the mound. This was his fourth year being on the varsity squad. (Photo by Melanie Holman)

If the COVID-19 pandemic had never happened and Prince Edward County High School’s varsity baseball team had played a season this spring, senior Wade Jenkins would have been a big part of the Eagles’ efforts.

Tyler Cristo, the new head coach of the squad, was officially hired in November, and he has noticed Jenkins from the beginning. Jenkins came to the team’s offseason conditioning sessions religiously.

“He worked hard,” Cristo said. “He’s a fierce competitor. He’s got a side of him that resonates. People listen. I had him in the No. 2 (batting) spot starting off all through our (preseason) camp, and then we did scrimmage Appomattox. And he was going to be my No. 2 pitcher on the hill and everyday starting third baseman.”

The coach said Jenkins would have cycled onto the mound every other game.

“He was going to be an impactful kind of player for us,” Cristo said, noting he expected Jenkins to not necessarily be a formal leader, but to nonetheless guide the team where it needed to go. “He’s that type of person. He’s tough.”

Not playing baseball and not being at school this spring has not meant Jenkins has been idle. He’s been farming.

“It’s been busy for me because I’ve been working, but I really miss (baseball),” he said. “It’s weird not being able to play, but I miss my teammates and being on the field. But it’s also given me the opportunity to see what the real world is like and grow up a little bit.”

Entering his final semester of high school, Jenkins already had almost all his classwork done.

“I had one core class left, and then I would have been ready to graduate,” he said.

He plans to make farming his official, full-time endeavor after school is totally completed. And this will not take him away from the area.

When it comes to the lost 2020 baseball season, he said what he misses most are his teammates, many of whom he had shared the diamond with since he was 4 or 5 years old, competing in Dixie Youth Baseball.

“We always had a good bond, the group of us,” he said. “We did a lot of things together, not only just baseball. We hung out on the weekends and did all kinds of stuff together. We were more like a family than a team.”

This spring would have been Jenkins’ fourth season on the Prince Edward varsity squad. In his time with the Eagles, he has played eight out of the nine positions on the field — all except center field.

“I never was fast enough for that,” he said.

He noted he also moved around in the batting lineup.

“Hitting was never my strong suit,” he said. “I was more of a defensive guy.”

Jenkins said his strongest contribution to the program as a player was his defense and, at times, his pitching.

One of six seniors on the roster, Jenkins said on-field leadership of the team would have been a shared effort among a group of players.

In the end, the work that Jenkins put in alongside his teammates in preseason this year is likely the finale of his career on the diamond.

“That was probably my last bit of baseball,” he said.