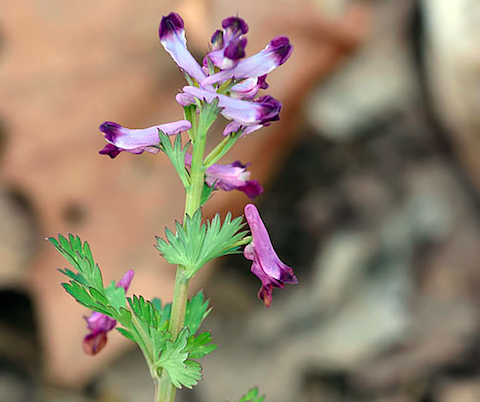 I went to Powhatan State Park last week, walked the usual trails and searched for Dutchman’s breeches, which I didn’t find.

When I got home, I had a message from a friend at the Virginia Department of Conservation and Recreation. He had been at the park several days earlier and had found Corydalis incisa, incised fumewort, growing in the floodplain along the river.

It looks benign – attractive, smooth foliage, spikes of deep purple flowers and an upright growth habit, but it’s been hailed as an emerging scourge, the next thuggish plant. Incised fumewort is a non-native, originally from Korea, China and Japan, and one of four species of Corydalis found in Virginia.

At the moment, it’s only found in a few locations around the state, including Powhatan State Park. In New York, however, it has spread rapidly along the Bronx River where it has crowded out more desirable vegetation. It’s also problematic in Maryland, North Carolina, Pennsylvania and Tennessee.

Incised fumewort grows from a tuber.

The first year, it only has a few leaves. The second year, the plant becomes upright and develops numerous branched leaves. It also blooms with purple tubular flowers arranged in clusters up to four inches long and with 10 to 16 flowers per raceme. The flowers are followed by oblong green seed capsules that resemble small green beans. After they mature, the seed capsules open so explosively that they can fling seeds as far as 10 feet. Ants also help disperse the seeds.

The Maryland Invasive Species Council has noted that, since incised fumewort thrives in the same habitat as lesser celandine (Ficaria verna), that its potential ecological impact is large. In New York, it’s movement along the Bronx River has been very rapid. If you find incised fumewort, pull it and bag it. Even then, several years of persistent effort may be needed to eradicate this plant. It can regrow from fragments left in the soil, and seeds remain viable for some time.

Remember, incised fumewort is quite attractive, but very problematic.

DR. CYNTHIA Wood is a master gardener who writes two columns for The Herald. She can be reached at cynthia.crewe23930@gmail.com.