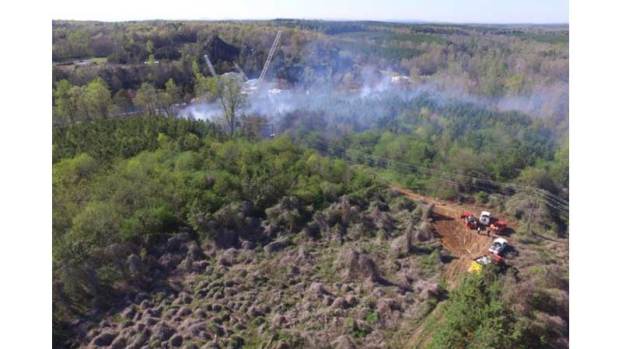 Crews from Arvonia, Dillwyn and Fork Union worked with the Virginia Department of Forestry Thursday, April 9, to extinguish a brush fire on West Morgans Road caused by a tree that had fallen onto a powerline. This image was captured by a drone after the fire had been extinguished.

The Arvonia Volunteer Fire Department (AVFD) responded Thursday, April 9, to the report of a brush fire in the West Morgans Hill Road area.

AVFD Fire Chief Chris Davis said the fire was caused by a tree that had fallen on a power line at approximately 2:30 p.m. in the afternoon.

Davis said high winds had dried out any previous rainfall and caused the blaze to spread over three to five acres of land.

When crews arrived, they discovered surrounding terrain and vegetation made the brush fire inaccessible. The Virginia Department of Forestry was able to assist by using a dozer to plow through debris and make a road for firefighters to use. The fire was fully contained by 7 p.m. that day.

Davis said high winds often lead to situations like Thursday in which a tree is knocked onto power lines, igniting trees and any vegetation underneath.

A cross adorned with flowers stands on the walkway leading up to the front door of Johns Memorial Episcopal Church... read more