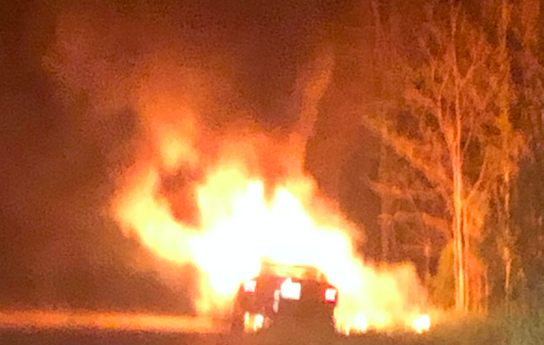 Crews from the Darlington Heights Volunteer Fire Department (DHVFD) responded to the report of a car fire in Pamplin Thursday, April 16.

DHVFD Fire Chief Dallas Tinsley said four units responded to the call after a Pamplin resident heard a car horn blaring at approximately 10:40 p.m. outside their home on Millbank Road. The resident followed the sound of the car horn to find a Nissan partially pulled off on the side of the road and engulfed in flames.

Tinsley said the owner of the vehicle had left the scene after the car had cut off, aiming to find a family member to help. When she returned, her car was fully involved and DHVFD firefighters were on scene. The blaze was contained within half an hour. Crews remained on scene until a wrecker arrived to remove the remainder of the car.

He added the vehicle was so consumed that it was not possible to determine the cause of the fire, although he suspects it was related to an electrical issue.

No injuries were reported.