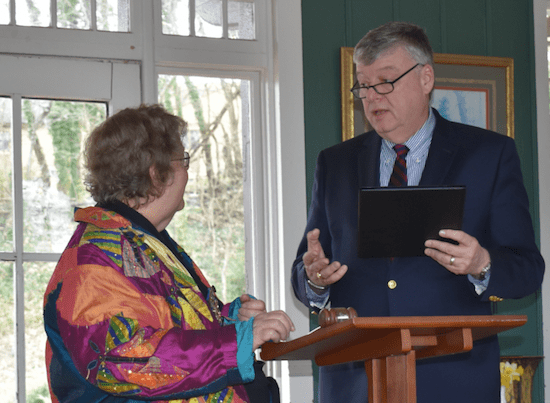 Club President Deborah McClintock began the celebration with a brief overview of the club’s history of service to the community.

The club evolved from the Fortnightly Music Club organized in 1914, and was reorganized as The Woman’s Club of Farmville May 19, 1920.

The club has spent a century supporting the unity of its members by promoting the civic, cultural, educational and social welfare of the community.

Whitus presented a proclamation to attendees in recognition of the club’s 100 years of service to the Farmville and Prince Edward community.

The club has amassed an abundance of records over its century of service. McClintock announced at the celebration that the club would be presenting its archives to the Longwood Greenwood Library as a part of the university’s program to archive information from local organizations for preservation and research.

Partygoers spent the afternoon sharing memories of how the club touched their lives before enjoying a humongous 100 year “birthday” cake.

Town of Farmville At- Large Councilman Dan Dwyer has qualified and will seek reelection for the same seat on May... read more