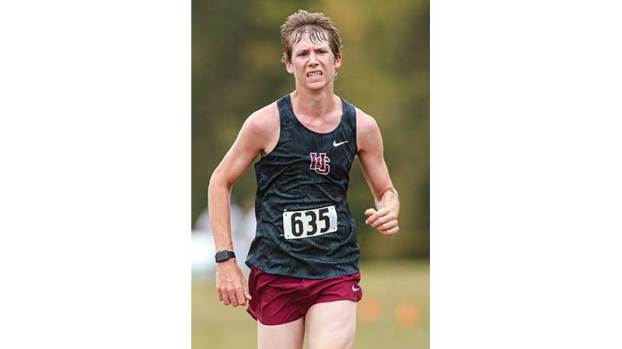 Hampden-Sydney College (H-SC) relaunched its long-dormant track program this winter, but the college has never had a program exactly like this one.

The emphasis of the new endeavor is specifically on longer-distance track events.

The list of participating Tigers is short, at least for now.

“We had five guys that we’ve listed on a roster that we (were) hopeful would participate,” Griswold said. “We’ve only been able to actually take two to meets.”

Those two student-athletes are freshmen Taisho Miller and Justin Stimpson.

Stimpson, of Farmville, is a former track and cross country standout at Cumberland County High School.

Looking back on his first indoor distance track season at the college level, Stimpson said he feels like it went great.

“It was a newer thing, and I feel like just the way the program went, it was a good start for what could be a lot more,” he said.

Griswold, who is also the Tigers cross country head coach, said it has been a lot of fun getting the distance track program up and running.

“We’ve been going to indoor track meets this last month and a half, and they’re just fun to go to,” he said. “The track meets we’ve gone to have been really well organized and on time. And our guys have already, I feel like, started to benefit from the program — the cross country guys we have doing it — in that it’s an opportunity for them, first of all, to run a different event than our regular cross country run, but also a chance to work on speed in that setting.”

Stimpson said it is exciting to be a part of the program’s beginning.

“We’ve gotten good support, even though it’s just a few of us,” he said. “It’s just me and Taisho right now, but they found meets for us, and I feel like the other teams have been inviting toward us.”

Griswold said Miller has been competing in the 800-meter run, and Stimpson has competed in the 800 and the mile.

The H-SC distance track program will also be active in the spring with outdoor track.

“Here in the outdoor season, it’s the 1,500 that (Justin will) run, and then Taisho may try some longer distances outside once we start our outdoor season.”

Stimpson was among the top-24 indoor mile runners in the Old Dominion Athletic Conference (ODAC), qualifying him to run in the ODAC Indoor Championships March 1.

“It was really great,” Griswold said. “It was another indoor mile PR for him. He had ran a second slower earlier this year, so it’s always fun when you see an athlete get a PR, and he moved up a few spots compared to his seeding, which is also fun.”

The outdoor season will begin for H-SC Friday, March 20, at the Washington and Lee Carnival at 4 p.m. in Lexington.

“Taisho signed up for the 10K, so that’s going to be an exciting race for him — 10K on the track,” Griswold said.

Stimpson will participate in the 1,500-meter run for the first time. He said he may try some longer distances later during the outdoor season along with the more familiar events.

“My hope is that both cross country and track will benefit from having track in the spring,” he said. “Runners coming to the program want to run, and so this will give them an opportunity to run in the spring also.”

In the meantime, Stimpson said he is willing to help with recruiting if he finds classmates who are genuinely interested in running.

”It’s supposed to be fun, so if we find people that are into it, we definitely try to talk to them and say, ‘Hey, you can come out,’” he said. “‘We’ve got this new program, and it’s something you can do.’”