A recent mandate by Virginia Governor Ralph Northam forced every restaurant in the commonwealth to move to delivery/takeout mode only or close.

The mandate is part of a multitude of statewide measures to combat the spread of COVID-19.

Although previous orders from the governor allowed for a 10-patron limit to dine-in services for Virginia eateries, the latest mandate enacted March 24 declares that all food and drink establishments must be closed to the public for at least one month, leaving only carryout options as a way to provide service to customers.

As a result, local restaurants have been forced to adopt to carry out service only, significantly reducing staff and profit. For many, the restrictions are taking their toll.

“We’re having a hard time,” Betty Wallace, general manager of the Cumberland Restaurant in Cumberland County said. “Right now, we’re just doing takeout. It’s rough on the restaurant because we’re a small business. It’s rough on our employees because it’s cut back on their hours. It’s just hard.”

Like most restaurants, Cumberland Restaurant is operating on a small staff — one cook, one manager and a server helping out front in order to make ends meet.

Wallace said the restaurant has operated in Cumberland for approximately 60 years.

The new way of operating means a change in hours. According to Wallace, the eatery is now closed Sunday night and all day Monday for the meantime and will be open all other days from 10 a.m. to 8 p.m.

Wallace said that despite the establishment’s struggles, customers have been extremely supportive. Many who come in to pickup an order leave tips for the servers to help them get by during these tough times.

“They have been absolutely great. They really have.”

Giuseppe “Jo” Lentini, owner of Pinos Italian Grille & Pizzeria in Dillwyn, said ]he began strictly offering takeout options from the beginning of the governor’s restrictions. He said the well-known, family restaurant is a town staple, and that having to turn customers away due to a maximum capacity in the dining room would break his heart.

Jo said the change has caused a 35% decrease in business, but he is prepared to continue to offer food to dedicated customers.

Jo’s sister, Marilena Lentini, owns the Pinos Italian Restaurant & Pizzeria in Farmville. Marilena is determined to make the best of the situation by offering curbside pickup and online ordering. Pinos has has begun delivery through the Wayfast app, allowing customers to have food brought directly to their doors.

Marilena noted she has had to cut staff due to the lack of business, although she tries to divide the schedule up fairly with remaining employees. Like several other eateries, Pinos Italian Restaurant and Pizzeria in Farmville is attempting to give servers additional hours in the form of manning the cash register and accepting calls for orders.

Some area restaurants have elected to temporarily shut down in light of recent events. Charley’s Waterfront Cafe announced March 23 it would temporarily close for both dine-in and takeout services until further notice, as did the One19 restaurant located on Farmville’s Main Street. Both businesses cited the health and safety of their customers and employees as a motivation for closure.

Sam Andrews, manager of Farmville’s Macado’s restaurant, said the governor’s restrictions have prompted the business to temporarily change its hours. It is now open 9 a.m. to 9 p.m. each day of the week. Andrews also stated that in addition to food specials, the restaurant is able to offer both bottled beers and wines for carryout service during this time.

Merk’s Place in Farmville has also altered its hours amidst the pandemic. The eatery is now open from 10:30 a.m. to 8 p.m. every day except Sunday, for takeout or delivery services only, of course. The business is only offering lunch and dinner services until further notice.

Osborn said the restaurant staff took into account the regular, large crowds that the popular new eatery draws in with musical performances. In an effort to flatten the curve early and prevent spread, the business decided to close its dining room to the public immediately.

North Street Press Club has been offering Wayfast delivery for a while, but the restaurant is also offering daily specials like two-for-one lunches on Tuesdays and Wednesday wing specials. Hours have been temporarily changed, as well. The business is closed Sundays and Mondays for the time being and operates all other days 11:30 a.m. to 8 p.m.

Riverside Cafe Owners/Managers Jean and Parker Wheeler made it clear that the virus was not going to close their establishment.

“Yes, we are open. We have never closed. We don’t plan to close. I don’t care how few people we have. We still have an obligation to be here and try to make it through the storm,” Jean Wheeler said.

She said the restaurant is offering carryout options for its full breakfast menu daily from 7 a.m. to 11 a.m. and the full lunch menu from 11 a.m. to 2 p.m.

In addition, the cafe is offering one special hot meal each day, along with four homemade soup varieties.

Shogun Japanese Steakhouse in Farmville has also changed its hours since the governor’s mandate. The steakhouse is now closed Sundays and Tuesdays and operates from 11:30 to 3 p.m. and 4:30 to 7:30 p.m. Mondays, Wednesdays and Fridays, as well as Saturday from 1 to 8 p.m. Shogun has also adopted several new family-style dishes to encourage families to gather around the dining table for a night at home.

It is clear that area restaurants are facing unprecedented difficulties during this time. However, all businesses couldn’t stress enough the support provided by customers across the counties, each giving thanks to those that have stopped by to order a meal and provide a smile. 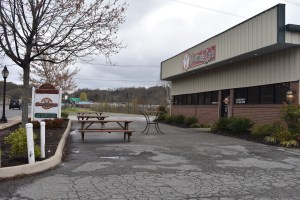 Riverside Cafe owner Jean Wheeler said she is determined to make it through this storm.

By Crystal Vandegrift and Alexa Massey The Farmville Herald A day after a second Longwood University student tested positive for... read more