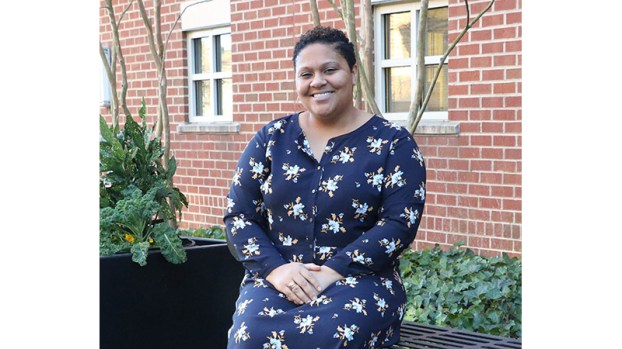 Prince Edward County Commonwealth’s Attorney Megan Clark is serious about her work and giving back to her community, but she also highlighted lighter elements of her life that help make up who she is. (Photo by Titus Mohler)

Megan Clark is a prominent person in the Prince Edward County community due to her role as the county Commonwealth’s Attorney (CA), so much is known about her, but not everything. Outside — and sometimes even inside — of her official roles, Clark revealed some fun things many may not know.

Starting with what is largely known, Clark was elected in 2019 to her second term as CA. She said she has never been happier with a job.

“Even on my worst day, I still love my job,” she said. “The community contact is great. Because I’m in a smaller office, I still am in the courtroom, which a lot of CAs don’t have that luxury, they do more of the administrative stuff and only do big cases, but I’m still in the courtroom.”

She said she gets along great with a law-enforcement community she described as “awesome.”

“I wish we had more resources, community-wide, to help offenders more, but in terms of just day-to-day things — love it,” she said of her job.

She is also active in her home church — Sharon Baptist Church, which is right across the line in Cumberland County.

“I have been there all my life,” she said.

She admits to struggling with her life/work balance, but she makes spending time with family a priority.

“I have a very close-knit family,” she said. “It’s not a lot of us. It’s my parents, it’s me and my sister, my sister’s husband and her daughter — and that’s my core unit.”

Her parents live in Prince Edward right on the outskirts of Prospect.

“Every Sunday we get together for dinner without fail, and I look forward to that,” she said.

Along with noting that she serves as a trustee and as the financial secretary at her church, Clark began to mention some things that a lot of people do not know about her, including that she sings in the choirs at her church.

She also sings with the Voices of Unity Community Choir.

“My home church will make me sing solos,” she said. “I prefer to sing in the background, and I thoroughly enjoy being with Voices of Unity because I can do that and there’s no pressure.”

“A lot of people don’t know I have terrible nerves,” she said.

They can even occasionally affect her when she is at work.

“If I’m making an argument to the court, or if I just first start out with questioning witnesses or just first start out meeting the jurors and talking to them, I’m nervous at first,” she said. “As I go on and get more comfortable, it’s fine. But initially, oh, it’s bad.”

She said her nerves related to singing are 110% worse, hands down, as she is afraid of forgetting her words.

Considering other things that she said she didn’t think a lot of people knew, Clark noted she is really goofy.

“(People) see me and they think just, ‘(She’s) serious,’ because you have to be with your job, but I just don’t take myself too seriously,” she said. “And I have a lot of fun.”

She said she used to have a phobia of dogs but got over the fear.

“We had dogs when we were kids, and nobody really told me that dogs would grow faster than you would, and when they play, they jump on you — scared me, never went near my dogs again,” she said.

But when Clark was about 20 years old, her sister got a little Pomeranian.

“I said, ‘If I can’t get over my fear with this little thing, then I probably need to seek some professional help,’” Clark said. “And now I love dogs, and now I have my own Pomeranian … And that’s my little baby.”

His name is Shadow, and he is a little more than a year old.

Clark also enjoys playing tennis in her free time, and she has even gotten together a couple of times with an area defense attorney to play.

She said that while facing off against each other in the courtroom is an adversarial process for attorneys, she countered the idea that defense counsel and prosecutors do not get along.

Following are the property transfers recorded in the Prince Edward County Circuit Court Clerk’s Office for the month of September.... read more