PROGRESS: ‘Above and beyond’ 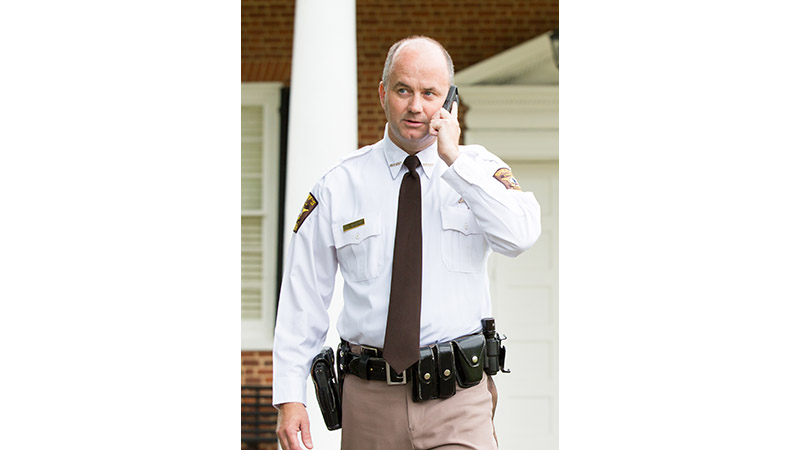 Cumberland County Sheriff Darrell Hodges dedicates himself to others through service to the county and a deep commitment to his loving family.

After getting a glimpse of the life of a law enforcement officer he found himself asking, “Wait, you all are paying people to do this?”

Hodges stayed with the police department and continued as a dispatcher until the age of 21 when he was able to go on the road as a police officer.

“It’s never been a job,” he remarks. “It really hasn’t. It’s always been truly a love. I think you have to really enjoy it, you know, because it’s got its moments, but for the most part, it’s a fantastic job. It’s a fantastic career.”

Hodges spent many years serving the public before eventually becoming the sheriff of Cumberland County. “You know, I blinked and now I’m like, ‘Here I am. Woah. They put me in charge? Holy mackerel.’”

Hodges’ friendly face is a familiar sight in Cumberland County. When he can find a speck of free time he loves to spend time with his family and be in and around the water, especially the riverfront.

He says although his job’s irregular hours can make it difficult to schedule activities with his wife and their two sons, he always makes family time a priority. Some of his favorite moments include attending his sons’ basketball, baseball and football games. His children also love hunting and fishing, and he adores taking them out to enjoy nature.

“It’s amazing how fast time flies,” he said. “I guess with this job you realize how precious life is. We deal with a lot of things that are difficult, and as silly as it sounds, something like putting together the Legos with the boys, something like that, I actually cherish that. I really do, because I know it changes in an instant.” One of the things Hodges loves most about Cumberland is the county’s sense of connection and community. He sees beauty in every part of the area and believes each part of Cumberland has its own treasured citizens.

When thinking about the county’s future, Hodges hopes for economic growth.

“If we could get some type of industry to come look at Cumberland, I think that they would love the people here,” he said.

He envisions a future for the county where residents don’t often have to travel outside of the county to find jobs, and he hopes the future will provide opportunity for the county.

One of Hodges’ greatest hopes is people will remember that the sheriff’s office works for the people.

“I just want people to know. I have some of the most dedicated deputies on the planet. They don’t do it for the money, because they can go to other jurisdictions right beside us and make a lot more money, but they stay in Cumberland because they care about their community,” he said. “They go above and beyond.”

For Hodges, being the sheriff of Cumberland County isn’t just a job. It’s a passion that drives him every day. It’s a chance to grow as a person and to aid in the development of the County. His mind is always on the safety of his community, and his heart is always filled with gratitude and an eagerness to lend a helping hand.